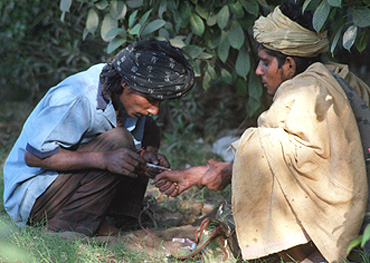 outlookindia.com
-0001-11-30T00:00:00+0553
For long, the main cause for the spread of HIV in India has been believed to be unprotected heterosexual sex. But data collected as part of a survey entitled 'HIV Sentinel Surveillance & HIV Estimation in India, 2008,' reveal that the two chief factors now responsible for the spread of the deadly virus are the rise in number of injectible drug users (IDU) and men having sex with men (MSM).

What is causing concern is that pockets in states such as Delhi, Punjab, Orissa, West Bengal, Gujarat, Chhattisgarh, Madhya Pradesh and Bihar, where IDU- and MSM-related cases were never a cause for concern, now call for urgent intervention. "IDU-related HIV cases were largely found in the Northeast, so we had a system in place to address that specifically. Earlier, the focus was on the migrant population, but now we cannot restrict ourselves to just that: everywhere we look, we are finding more and more cases related to IDU and MSM," says Dr Ajay Khera, assistant director-general, NACO.

Another change in pattern revealed by the survey is that IDU-related cases are on the decline in states like Manipur and Nagaland, where it was endemic, but on the rise in West Bengal, Mumbai and Delhi. "The dip in numbers reflects our intervention policies in those northeastern states. This year, the nationwide focus has to be on IDU- and MSM-related cases," says Mayank Agarwal, joint director, NACO.

Tamil Nadu, long thought of as a poor performer in HIV prevention, now has fewer cases. "Our efforts have been on in this state for the past 15 years, and the change indicates the intervention carried out," says Khera. The other finding that has come to light in the survey is that, in the Northeast, the sex trade is the new driver of the HIV epidemic, replacing the users of injectible drugs.

The gender difference in the spread of the HIV virus brought out by the survey is that most of the HIV-positive women, who form 40 per cent of the total HIV cases, are innocent housewives or in monogamous relationships. "This too needs to be addressed urgently. HIV is a typically concentrated epidemic and the idea is to keep it in check at 0.3 per cent of the adult population in the country. The overall goal of the NACP-III is to halt and reverse the epidemic in India over the next five years through integrated programmes," says Khera.