Let us not expect Modi to relinquish his ideological roots. The BJP’s poll manifesto points to the limits of his flexibility. 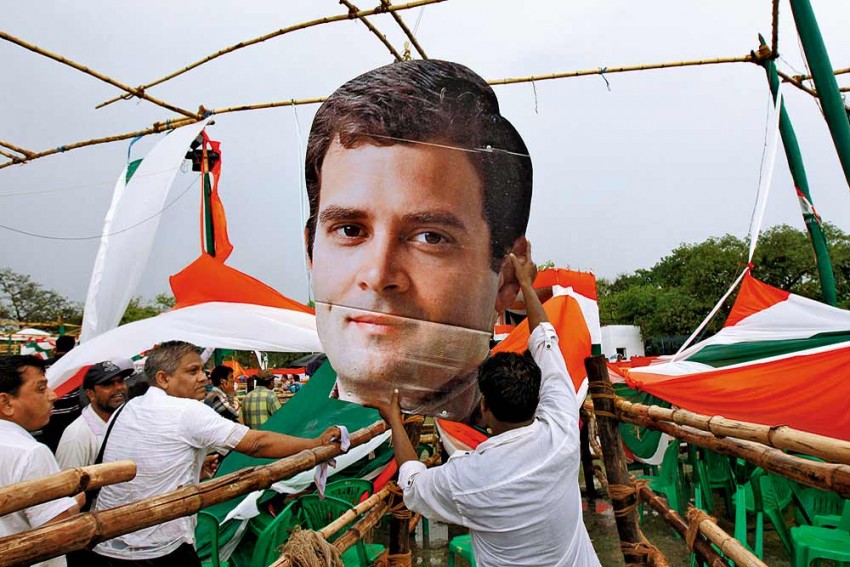 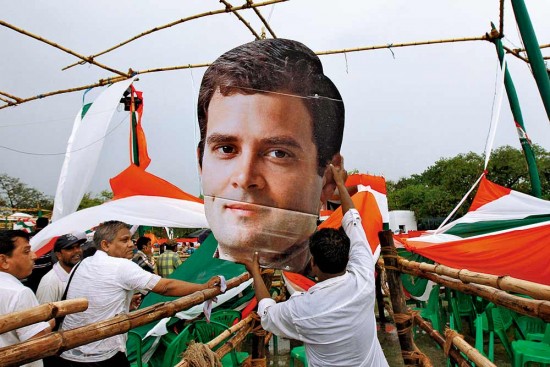 “It is high time for me to put an end to your sitting in this place.... Ye are grown intolerably odious to the nation.”

—Oliver Cromwell
on dismissing the Rump Parliament on April 20, 1653

Out of deference to the Election Commission of India, I won’t quote the rest, the choicest parts, of the speech of the Englishman whose talent for high-minded, inventive political invective has rarely been bettered. Cromwell’s inspired words capture the intentions of Indians in this season of reckoning towards the party that has ruled at the Centre for a decade, which is itself unprecedented in recent times.

That the Indian National Congress and the United Progressive Alliance government it heads have, through a combination of damaging and feckless socio-economic policies, unmatched levels of corruption, and the collapse of leadership and legitimacy, “grown intolerably odious to the nation”, and that the political marketplace has downgraded the Congress’s stock to junk status, is beyond argument. Every opinion poll, every indication from the ground, every portent in the polity spells out the ejection of the Congress from the seat of power on May 16.

This much about the outcome of the 16th general election is settled and, moreover, it makes eminent political sense. But the Congress is not running on empty either. In fact, in my somewhat contrarian reading of the situation, Congress deputy chief Rahul Gandhi is far from being played out in the polity. His campaign rhetoric notwithstanding, he has not merely accepted what stares every Congressperson in the face. The heir presumptive is consciously preparing the party for an effective fighting role in the Opposition, which presupposes an ability, which he has not so far shown, to join forces with other parties on secular-democratic issues on which there is broad agreement.

But what about the alternative?

The prospects of a ‘third option’—a combine of non-BJP, non-Congress players, mostly strong regional parties, supported from outside by the Congress and perhaps the Left—coming to the fore after the election and staking a claim to form the government seem to have receded, even if some political leaders haven’t abandoned the idea.

It’s almost guaranteed that after counting day, the president will invite the elected leader of the single largest party in the Lok Sabha, the Bharatiya Janata Party, to have the first turn at forming a government. The overwhelming probability is that leader will be ‘Vikas Purush’ Narendra Modi, NaMo to millions of fans (blaspheming consciously or unconsciously for a higher political cause, but who are we, unreconstructed votaries of free speech, to object?)— “an ersatz version of the BJP”, in the opinion of sociologist Shiv Visvanathan (writing in The Hindu on April 5, 2014), an outlier who has propelled himself to centrestage against all the odds, causing much unease among the party’s old guard and exposing “a deep faultline”.

The language, style, treatment of issues might vary, but core Hindutva issues have always made it to BJP manifestos.

Deep faultlines are structural realities that can’t be easily repaired, if they can be repaired at all. In politics, they can be said to denote internal contradictions in the realm of ideology, programme and practicality that virtually defy resolution within a limited time frame. It is not yet clear if the dissonances, dissensions, sulking bouts and divides within the BJP that have had such conspicuous play ahead of the 2014 polls represent internal contradictions in that sense. The personality cult of Modi, for which there are few precedents within the BJP and the Sangh Parivar, is decidedly over the top. (It can be sampled at the official website of the party, www.bjp.org). The Modi cult, his campaigning style; the ruthless assertion of his authority, working in tandem with a shrewdly calculating party president, in seat allotment, even at the cost of annoying BJP veterans; the talk of Modimantra, Modivision, and Modisarkar—all this causes unease among the political old guard and, presumably, the ideologues.

But then, this can also be read as sound and fury signifying not quite nothing, but signifying perhaps manageable disputes over the right road to power. At any rate, it would be a political mistake to regard Narendra Modi as his own man, free from legacy constraints, a development messiah who has a programme different from the Hindu communal vision and programme that the BJP has historically represented and has tried to put into effect whenever it got the opportunity. Everybody who follows Indian politics is aware of Modi’s background and career graph—from his political debut, at the age of 20, as a full-time pracharak of the RSS through his assignment to the BJP a decade-a-half later, his ascent of the party’s organisational ladder, his unexpected induction, in 2001, as chief minister of Gujarat, his role in the anti-Muslim pogrom of 2002, and his unbroken electoral success thereafter. Whatever one may hold against Modi, the charge that he is in a process of betraying, or at least turning his back on, his ideological, political, and organisational roots cannot be sustained.

Actors in search of roles Third Front leaders at a meeting in New Delhi. (Photograph by Jitender Gupta)

Let us look at a recent development that speaks to this very issue. The BJP had a hard time explaining its decision to release, in the teeth of the Election Commission’s displeasure, its election manifesto on April 7—the first of the nine ‘poll days’. The betting in the news media was that core Hindutva issues would not find a place since they would sit ill with Modimantra. In a provocative opinion piece titled Modi is the manifesto: Why BJP doesn’t need a hefty document, R. Jagannathan, editor-in-chief of Network 18 group publications, contended that “manifestos can be constricting”, they can act as “a tripwire for a party that hopes to win and form a government”.

In other words, the betting was based on the reasoning that the less a manifesto revealed about—the more it camouflaged—the ideology and character of a party like the BJP, its real programme, policy agenda, and intentions, its stand on sensitive and highly divisive issues, the better it was for its prospects in elections and governance. This reasoning went against the evidence of history. A close look at the BJP’s election manifestoes from 1996, when it began bidding seriously for power at the Centre, shows a consistent pattern of fielding core Hindutva issues, with 1999 constituting the sole exception (there was no BJP manifesto for the 13th general election, only an ‘Agenda for a Proud, Prosperous India’ released by a newly formed NDA). The language, style, and treatment of issues might vary but the core Hindutva issues have never failed to make it to the manifestos, right from 1989 as a matter of fact. The ideologues evidently saw to this, despite the reported sporadic attempts of A.B. Vajpayee to moderate or soften the message.

The internal constraints the BJP may have in implementing its governing agenda will have to come from its NDA allies.

So it was no surprise that when it was finally released, the BJP’s 2014 manifesto did not break with the historical pattern radically. It fielded the project of building a Ram Temple in Ayodhya (on the grave of the Babri Masjid); the abrogation of Article 370, which confers a special constitutional status on Jammu & Kashmir; coming up with a Uniform Civil Code; the usual sentiments on cow protection and cow slaughter, and so on. There were caveats, such as working to find a solution within a constitutional framework and promoting dialogue among religious communities, but these were neither novel nor meant to negate the majoritarian content of core Hindutva demands. Two significant departures from the language of the 1998 manifesto, which proclaimed the BJP’s commitment to the concept of ‘One Nation, One People and One Culture’, were the omission of ‘One Culture’ and the adoption of ‘unity in diversity’. But then, the phrase, ‘One Culture’, denoting majoritarianism, did not find a place in the 2004 and 2009 manifestoes too and the commitment to ‘unity in diversity’ was a straight lift from the 2009 manifesto, in the authoring of which prime ministerial contender L.K. Advani surely had a leading hand.

Those who expect Modi to kick the ladder on which he ascended misread the man as well as his movement. The BJP, after all, is a highly ideologised political entity. It is a member of a volatile family, the ‘Sangh Parivar’, which is ‘nurtured’ by the RSS, the ideological or conceptual brain directing family affairs. To represent intra-­familial relationships in this right-wing communal formation, there is no need to go to any external source. Here is what the ‘History’ section of the official website, www.bjp.org, says: “The Bharatiya Janata Party is today the most prominent member of the family of organisations known as the ‘Sangh Parivar’ and nurtured by the Rashtriya Sway­amsevak Sangh.... History is the philosophy of nations...the Sangh Parivar has a very clear...conception of Indian history.... [The RSS] has no doubt about Hindu identity and culture being the mainstay of the Indian nation and of Indian society.”

The BJP has come a long way since 1984, when it suffered a crushing defeat at the hands of a Congress that rode a sympathy wave to an unprecedented triumph. The party’s ideological nature, its organisational strength, the depth of reserves provided by its membership of the Parivar explain its resilience and its ability to reinvent itself in changing socio-political circumstances. It began to taste electoral success only after trading the vague and somewhat indeterminate right-wing platform of its formative years (1980-1986) for the platform of aggressive Hindutva, adopted at its Palampur session in 1989. In Gujarat, the succession of electoral victories has been achieved in a context of communal polarisation following the horrors of 2002.

The BJP, which is guaranteed single largest party status in the 16th Lok Sabha by some distance, will have a ‘last mile’ problem to solve in its goal of reaching the magic number of 272 seats. The internal constraints it may have in implementing its real governing agenda will have to come from its non-communal NDA allies. That, in turn, will depend on the number of seats they win, taking us back to the famous Second World War question attributed to Stalin: “How many divisions does the Pope have?”

Recent developments, including the Parivar’s highly communal campaign pitch in Uttar Pradesh and Amit Shah’s inflammatory and criminally prosecutable rhetoric, do not bode well for the polity. They are intimations that the BJP, is not about to change its spots.

Former editor-in-chief of The Hindu, N. Ram is chairman of Kasturi & Sons Ltd, which publishes the paper