The film was trashed by critics but lapped up by the audience, taken in as they were by the bright, gaudy sets 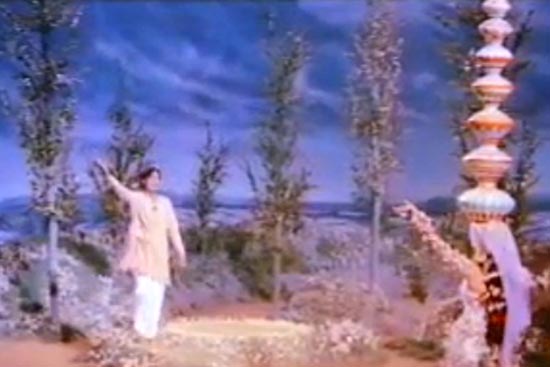 The film lives up to its name, Nine Colours, each denoting the various rasas or emotions, dazzling the audience with its bright, elaborate colourful sets and extravaganza. V. Shantaram’s 1959 film comes with a history, indeed in the opening scene the filmmaker directly addresses the audience to explain how he conceived the plot. It seems Shantaram had nearly lost his eyesight while shooting his earlier film, Do Akhen Bara Haath. While recuperating, he visualised an elaborate set of colours that he had not seen before, and thus was born Navrang. The film was trashed by critics but lapped up by the audience, taken in as they were by the bright, gaudy sets and intricate dance sequences and songs. The story is of a poet and his muse, which in his imagination happens to be his dom­esticated, down-to-earth wife but that’s not revealed to her till the end. An anaesthetised Mahi­pal, a woodcut marionette Sandhya, an Eastman pink-and-gold, some classics are wrought thus. And it all coalesces into Manna De’s Tu chhupi hai kahaan. A sub-plot of a British takeover and the patriotic poet’s resistance embellishes the narrative and also struck a chord with the masses.