His music is immortalised in films like Rattan, Baiju Bawra and Mother India. At 86, the composer is out of retirement with Akbar Khan’s Taj Mahal. 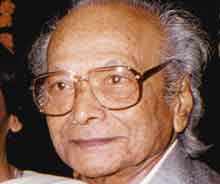 How did you recreate the Mughal era now that live musicians are missing?
One misses that, but you use appropriate sounds to get the right feel.

Which singers did you use?
Ajay Chakrabarty for a classical number, Hariharan and Preeti Uttam.

How was the experience?
I don't give up on a song till I'm satisfied. There were few songs in this film—just five.

Which was your last film?
The remastering of Mughal-e-Azam. Before that Guddu in 1995, Teri Payal Mere Geet in 1993.

The remastering cost a huge amount?
Yes, Rs 1.3 crore for just the music.

It's been 50 years since Baiju Bawra was awarded for best music.
Yes, I've done several films like Mother India, Ram Aur Shyam after that but never won any award.

The best song you've composed?
It is yet to come and it shall be my last.

What's the status of your music academy?
The government has given me a plot and the plans are ready but it requires a lot of money—Rs 8 crore and that still has to be raised.

Why are you so keen on the academy?
Music is an integral part of our culture. After the success of Mughal-e-Azam you can see how films can be used to recreate history for the coming generations. It will keep the generations in touch with our traditional and folk music.