Some find it beautiful, but there is a colder side to snowfalls — that of being a ruthless, uncontrolled killer Updates 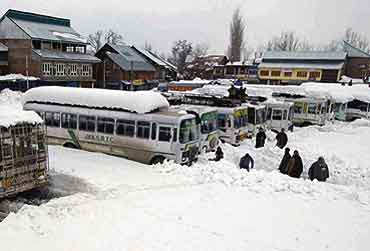 Though the people of Kashmir have been assured that their tsunami of snow has passed—only moderate snowfall is predicted now—booming avalanches, which have taken hundreds of lives in their wake, continue to strike terror. Since the forecast is that avalanches will continue until the snow melts, the worst is not yet over.

Heavy rain and snowfall since February 6 have killed almost 500 people so far. Many have been reported missing, while others need serious aid. Such heavy snowfall—up to 15 feet in some places—had not been seen in the Valley for decades.

Avalanches are now sweeping away entire villages. On Wednesday evening, eyewitnesses saw a mountain of snow crumbling down on the Waltengo Nar village in the Pir Panjal. "It roared like 50 trucks and then there was no village," headlines quoted survivors as saying. Other villages struggled to survive.

While villagers are digging helplessly in the snow to find their relatives, aid is yet to reach many people. The damage to property and livestock is impossible to quantify at this stage. Survivors live in constant fear of being killed by fresh avalanches while fighting food, shelter, water and fuel shortages. As NH1A—the Valley's lifeline—remains closed and is likely to remain so for 10 more days, there seems no early respite.

Meanwhile, tales of death and destruction—and the rare story of survival—keep pouring in. And with no space for burial, dead bodies are piling up. Baltengu in South Kashmir, still reeling under white terror, is one such hamlet. "I have lost my family in one go—my three daughters are gone. What's the use of being alive?" asks a devastated Aziudin, who trekked 20 km from his village to reach Qazigund.

When reporters reached Baltengu, after trudging through snow for three hours, no government relief was to be found there. "The army is our only hope,...