A fitter, tougher Sania is game for a match. Russian obstacles may be a passing phase. 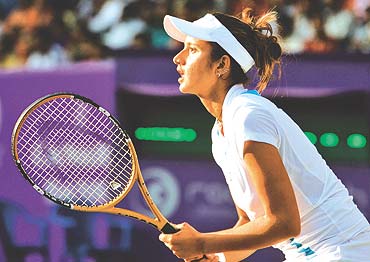 outlookindia.com
-0001-11-30T00:00:00+0553
Anna Chakvetadze confesses to being sick of having to play Sania Mirza so often, but it is the Indian who is desperately in search of a route past the Russian. Her straight set loss in the third round of the US Open in New York—and her fourth defeat in as many meetings with Chakvetadze this year—stopped Sania Mania from breaching its banks, like two years ago when she made it to the fourth round. But, indicative of her growing maturity, Sania is not regarding this as the crowning disappointment of the year in which she has done enough to climb to a career-high rank of 27. She realises now, more than ever, that she can not only break into the top 20, but also enjoy a lengthy stay up there.

Sania reaped dividends in the hardcourt season for embracing a tough fitness regimen when recovering from knee surgery. Sania and her father Imran Mirza believe she would have broken into the top 30 four months earlier had it not been for the knee injury in March. "Any good fitness trainer could have helped her and (South African) Heath Matthews is good. But the big effort had to come from Sania and it's remarkable that she was able to put in that focused effort," Imran says. "Fitness is definitely very important in helping Sania reach this new level. Once she decides she wants something, Sania is willing to work her heart out to achieve that goal."

The youth idol from Hyderabad is also growing in mental strength. She turned the corner as it were when she extracted a gritty victory over Akiko Morigami in Stanford after being down 1-4 and then 3-5. And this, after being down a set. "I am mentally tougher now than I ever was," she says. "I do not wait for my opponents to give me points by making errors. I'd rather take them myself." The 20-year-old remembers the match against Israeli Shahar Peer in San Diego last month. She took the court riding on confidence from her appearance in the final at Stanford the previous week. "Shahar was a top 20 player but I didn't believe I was going to lose even after losing the second set," recalls Sania.

Undoubtedly, playing on the doubles circuit has hugely improved Sania's singles game. It has definitely helped improve her volleys, and given her the confidence to try out things she has been working on. She has also added a much-needed sting to her backhand and overhead strokes that were once perceived as weaknesses. These have helped her get the measure of top 20 players in as many as four out of five matches this year, but the winning laurels in all six meetings with top 10 players have eluded her. Imran, who doubles up as her coach, believes Sania needs to overcome some more weaknesses in her game before she is ready to mount a stiffer challenge against top 10 players. When asked if attention is being paid to ensure a more consistent first service, he says, "Of course, work continues on the serve, there is improvement on that front. But the serve is always the most difficult to correct after the player has crossed age 16."

There are some who suggest that Sania's game would evolve further if she has a travelling coach. The Mirzas have tried partnerships with coaches as diverse as John Farrington and Australian legend Tony Roche. But such tenures have all been short-lived, since Sania tends to rely on her father. "He has always been around and understands me on a personal level. He's very easy-going and relaxed before and after a match," she says, adding, "I always say 'Never fix what's not broken'. If and when I have a bad patch, maybe we can get a coach." Spaniard Gabriel Urpi now coaches Sania, but only on a part-time basis. He took up the consultant-coach's role before this year's French Open and has assessed her game well. "I think Sania can improve a lot," Urpi said. "If you look at Sania's game and age too, you realise that the margin to improve is very big. I think she has great potential, quick acceleration, and her natural game is pretty good. She can improve in consistency, have better footwork and can learn to use her big weapons at the right time. This means hard work, and you have to be lucky with injuries. Above all, having fun is the best way to learn."

Talking of learning, Sania has picked up lessons from the free-falling experience that saw her slip from rank 31 in 2005. "Ranking is only an indication of where you stand and is not foolproof data," Imran says. "When she was 31 in 2005, she was lucky to be there, thanks to a couple of good runs and luck of the draw. She was playing top 70 tennis then. Today, she is playing top 30 tennis. However, tennis is very competitive and if one follows all the top 100 players, one will realise that almost everyone—barring the top five—has had ups and downs as far as rankings are concerned."

The Chakvetadze impasse may have impeded Sania's sprint on the tennis highway for now, but she has her feet firmly planted on the ground this time around. That, along with her growing maturity, confidence and fitness, attests that her best is yet to come.