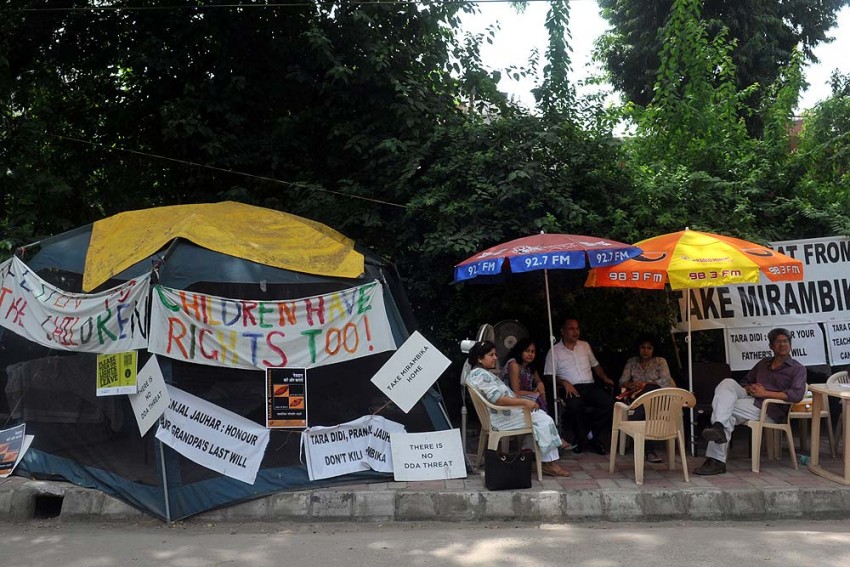 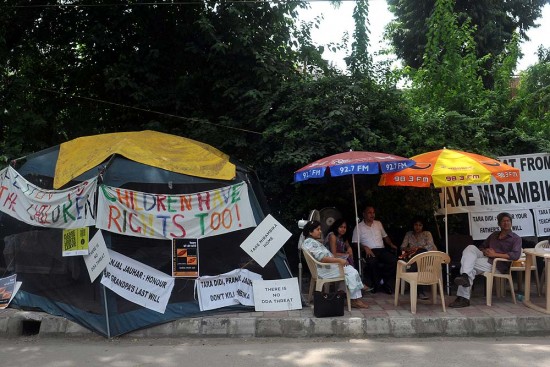 As might be expected, the protesters are extremely soft-spoken and gentle of mien. There’s no shouting of slogans or pumping of fists. Just a group of parents and several banners with ‘Save Mirambika’ hung all aro­­und them. They are perched across the busy south Delhi street in a cosy tent, sit­­ting, waiting, hoping for something to happen. It has been over 70 days now, the past two months have been nothing short of an ordeal for parents and students of the Mirambika Free Progress Sch­­ool. Their sentence began when the Sri Aur­obindo Educational Society, under which the school was started, dec­­­ided to open an engineering college on the lush ten acres of land where the school has functioned for the past 34 years.

Once an open school based on the idea of learning through nature, it had no syllabus or exams. Parents fondly recall the years their children spent on the campus, seeping in the energy of the environment and growing into themselves. The school has now been shifted into a building  in a compound almost ten times smaller than the original campus. “Free learning means interacting with nature and coming to terms with oneself, something our children are no longer at the liberty of experiencing,” says Deepak Gopinath, a father of two children, both studying in the school. It was always more than just a place of education. “It is a community that has brought all of us together,” is the common refrain.

Warning bells rang for the parents when the AICTE, the body which certifies engineering colleges, came to inspect the school grounds in May. It was declared a picnic day for the students; they were cleared off the school premises and ins­p­ectors moved in. A few days after this, the school was shifted to a smaller bui­lding and the 170-odd students huddled into what were dorms in the Aurobindo ashram. This raised the hackles of parents, who allege that the aim of the Aur­obindo Trust is to close down the exp­­­­­erimental school and start a lucrative engineering college in the heart of the capital. They were outraged enough to file a writ petition asking for a stay on the construction. They won the round—the cou­rts sent out a notice saying the construction of the college was illegal.

Mirambika is mostly run by parent-volunteers. When cases were filed against its shifting, many were fired.

Nevertheless, construction continued and the Aurobindo Trust filed an appeal against the parents. They, in turn, filed a fresh case for a stay on the construction, which is being heard now. The Mira­m­bika parents allege that the official from the department of education who has to mediate in the case is caught in a conflict of interest, as two of her children are studying in Mother International School, and thus can be counted on the side of the Aurobindo Trust. Mirambika is mos­tly run by teachers who are parent-volunteers—most parents have also taught in the school for several years. When cases were filed against shifting of the school and the clandestine move to start a college, several teachers, or diyas as they are called in the school, were fired or asked to leave without due notice. Despite attempts, Aurobindo Trust representatives refused to speak or answer e-mails on the matter to Outlook.

Several students were also transferred to the Mother International Sch­ool mid-­session, a move traumatising for the chi­­ldren who had to adjust in a conventional school environment after studying in an open school with an alternate curriculum for most of their lives. Even the new, cramped sch­ool proved unbearably stifling. “Sev­­eral children started complaining of headaches and tummy aches. It was clear they didn’t want to go to school in the new premises,” says one of the protesting parents. Colourful signs students have painted keep them company around their spot of dissent, exhorting authorities to ‘make Mira­mbika free’ and give students their freedom back.

As lawyers from both sides battle it out in the courts, parents lay a courtly siege in batches before Mirambika. With their spread-out tents and chairs, they have a faint hikerly air about them. But behind their polite protest lies quiet conviction about a way of living and learning.