Why prominent people are so effusive about Khushwant Singh 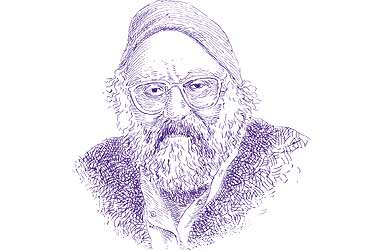 I always felt an urge to meet Sardar Khushwant Singhji. I felt this because I see in him a unique writer, who even at age 92 is continuously writing. Every week I see his articles. When I read them, I see happiness, I am reminded of an intellect who is beyond religions, cultures and language barriers. I feel the writings are in continuity. And when I read his books, they give me the inspiring message of promoting love without bitterness. Such a personality really attracted me and I met him briefly. The time I spent with him was so beautiful, it was an intellectual exercise for me. Above all, my respect for the writer increased. He told me that his mission in life is writing and through writing he gives happiness to people. I dream of writing about events and give a historical background in the way he does in his books. In short, Khushwantji gives happiness and courage to writers. His books that I have read, History of the Sikhs and Train to Pakistan and many others, are great works. I wish him many more years of active life, health and many more columns.

What I said about Khushwant in this poem—could not be stated in a truer or more heartfelt manner by me. He is a wonderful man and I am enormously fond of him—and perennially grateful that someone of his energy, width of interests, liberality of thought and sense of fun is around. When I went to see him last month, he was in wonderful form, and I enjoyed his company so thoroughly that I breached the time barrier we normally so strictly adhere to. I got upbraided on the way home (by his mother, Leila Seth).

The poem:
King of the Columnists and prince of hosts,
Hero of cats (twenty at least) who feed
Under your aegis, trenchman of toasts—
Scotch, naturally, not French—God knows we need
Humour and courage, tolerance and wit
When hope is scarce and murder’s blessed by prayer,
And every bully, oaf, and hypocrite
Nurtures his flock on hatred and hot air.
Threats to your life have not made you less bold.
Sexcess can’t spoil you. May you scatter your words
Inimitably on for decades more—
No less amused and generous than your old
Grandmother, standing by the courtyard door,
Halting her prayers to feed and chide the birds.

Khushwantji has been a life-long friend, a source of quiet support and comfort. I have always been impressed by his breadth of scholarship, his patriotism, his creativity and his humanism. He has held the attention of successive generations of post-Independence India with his keen observations, his sharp intellect, his earthy common sense and a great sense of humour. I am fortunate to have had his friendship and affection.

Khushwant Singh is, of course, a perceptive observer of events—both funny and tragic. But what is particularly striking about his writings is his willingness—even joyful eagerness—to break taboos and conventions. There is something of a charmingly hedonistic rebel in this quintessential bourgeois artist.

Khushwant Singh has made a milestone of everything he has touched. His History of the Sikhs is a work of magisterial scholarship; his Train to Pakistan is one of India’s greatest post-war novels; his pioneering editorship of the Illustrated Weekly of India was largely responsible for midwifing the modern Indian media into being; his weekly column, which has been appearing for decades, is unmatched for its variety, acumen and wit. What is more, he is a man of boundless generosity, one of the rare writers who is consistently supportive of others. As much for his personal qualities as for his literary achievements, he is a national treasure.

My acquaintanceship with Khushwant’s writing is much older than my friendship with him as a person.... This, though, was well after that fraudulent Emergency and his laudatory references to the personages of those times. This troubled (me) greatly. But those rough edges got rounded and memories mellowed with time. Our friendship grew, particularly when he came to Parliament. Outspoken, outrageously so, he converted this into a hallmark, a kind of authorial USP, adding immensely to the readability of his column: scatological jokes, sex as a theme, an easy writing style, evening soirees at his home, an engaging and convivial individuality combined with eccentric tastes and habits, all this has given him the affection (and envy) of many. More strength to his elbow, more good whisky by his side, and more beautiful women on (in) his arms.

Khushwant Singh has been a prolific columnist, a free and frank opinion-maker, fearless in his thoughts and deeds and an extremely endearing personality. I have known him both through his writing as well as through his personal relationship with my parents. He was well-known to my parents, especially my mother, she being a Sikh too. It was an honour for me when his son invited me to the launch of his biography in Delhi. Both of us were also briefly on the board of directors of Tehelka, and it was wonderful to spend quality time with him on matters concerning the media.

I have said this before and I say it again, the one man I’d choose to be stuck on a deserted island with is Khushwant Singh. He would fill the absence of society in a wonderful way. He’s well-informed, versatile and from his opinions you can tell here’s a master talking. I would be enriched by his company. His sense of humour is so attractive that one won’t miss other company.

He is a man we all know and love. I admire his guts and his writing.

...And The Ones He Hates