Brings together a formidable line-up of actors, and then goes ahead and shamelessly wastes their histrionic skills in roles that could well have been played by rank amateurs. 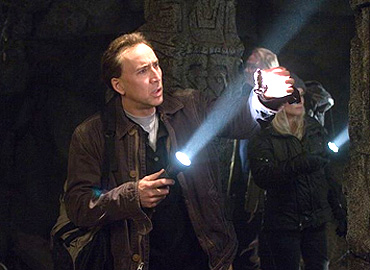 Part II of this American treasure hunt series brings together a formidable line-up of actors—Cage, Mirren, Voight, Keitel, Harris. And then goes ahead and shamelessly wastes their histrionic skills in roles that could well have been played by rank amateurs. Only the lure of big bucks and the promise of some fun and entertainment could have driven these guys to sign up for the film. But while they must have garnered the big bucks for sure, the film utterly lacks in any zing or excitement to have kept them going. No wonder each of the thespians seems to be on autopilot or appears to be sleepwalking through their performances. Benjamin Franklin Gates (Cage) is back at booty-hunting, his task this time being to unearth the hidden City of Gold. But gold-digging is only half the story. He also has to clear the name of his ancestor who is being accused of assassinating Abraham Lincoln by this strange guy called Mitch Wilkenson (Harris) who flaunts a page from the diary of John Wilkes Booth (the same who history records as having killed Lincoln). Each of the characters is as flat as he or she can get, the only frisson—a badly cutesy one at that—coming from the bickerings of the two couples—Cage and Kruger, and Voight and Mirren. Sidekick Bartha provides a concession to comedy, coming back in the sequel to make a fool of himself. The film is packed with ciphers and symbols, clues and codes, crypts and vaults, car chases and dashes across Paris, Buckingham Palace, Oval Office and Mt Rushmore.

The plot is illogical to the core, which one would have accepted had the film been a sheer roller-coaster ride, leaving you little time to notice the holes in the plot. In fact, though, the film is so boring that even reacting to all the flaws seems to be too much of an effort. Nothing more than an exercise in inanity, all the film succeeds in doing is giving a rather silly (unintentionally so) picture of Americans, their obsession with royalty, their president (who gets so easily kidnapped and has a secret book he doesn’t seem to pay much attention to) and specially the harebrained FBI agents.

So, Who Minds A Bit Of Gore?