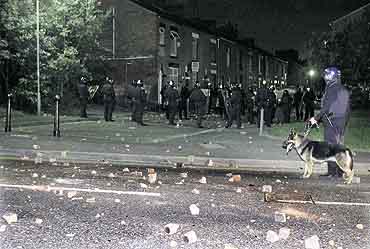 outlookindia.com
-0001-11-30T00:00:00+0553
Fans of Nasser Hussain's batting will know that early in his innings, he often struggles with his timing. But never has he mistimed a shot so comprehensively, and so humiliatingly, as he did in issuing his criticism of young Asians for failing to support the England cricket team. Even as his statements rolled off the presses, his arguments were starkly rebuffed in the streets of Oldham, Manchester, where Asian youth fought bitter battles with police and far right groups.

The provocation for the young people in Oldham had been weeks of neo-Nazi activity in the streets, an intensification of police harassment, and a popular media that systematically ignored mounting evidence of violent attacks on local Asians while pumping out sensationalised stories about an isolated attack on an elderly white man.

The provocation for Hussain seems to have been the visible and vocal presence of Pakistani fans at this year's first Test at Lords, where the customary solemnity was pierced by insolent cries of "Pakistan zindabad!" England rolled over the Pakistanis in three days, but the crowd seems to have left a bad taste in Hussain's mouth. "It was disappointing to see a sea of green shirts with the names of Pakistani players instead of ours," he said. "It reminded me of when we played India at Edgbaston (in Birmingham) in the World Cup in 1999. It was like an away game because so many people supported their side."

I attended that match and remember it as a delight—an effervescent multi-racial crowd, the music of drums and whistles, the banners and placards. And, yes, I also remember the minority of resentful England fans who vented their drunken frustration in racist abuse. Nonetheless, the day seemed to me full of good omens for English cricket. Indeed, for a time it seemed that the hidebound English authorities would at last recognise their greatest untapped resource—the love of the game in the Asian communities. They gave hints that, if nothing else, they saw Asians as a source of ticket-revenue and future international talent.

But since then they've done nothing to reach out to this new constituency, and it's hard to resist the conclusion that they hanker for the long vanished era when everyone who came to a Test match in England supported England. Hussain is a cautious and circumspect individual—he wouldn't have risen to the England captaincy if he were not—and he has until now refrained from making any statements in relation to racial issues. It is inconceivable that his lengthy published remarks on the need for young Asians to support England were issued without at least the strong encouragement of its cricket board.

In these remarks, Hussain says he "cannot understand" how Asians born in Britain could back India or Pakistan in cricket. This is contentious enough. But he goes further. He effectively blames young Asians for their own continuing exclusion from much of club and county cricket. "I am not criticising the mums and dads who moved here, they have divided loyalties. But if more of those Asian lads are going to come through to the England squad, then I think it is going to have to come from themselves—you also have to ask, are those (Asians) born here doing enough? Are they making themselves available for their local club sides and county sides and stating their ambitions to play for England?"

Here was Hussain's answer to those critics who had argued for several years that young blacks and Asians, particularly in the inner cities, were finding it difficult to gain access to facilities and to penetrate the English cricket set-up.In defiance of the evidence assembled in academic surveys and journalistic exposes, Hussain has chosen to blame the victim.

The media preoccupation with "Asian rich lists" has given rise to an image of British Asian affluence and influence. But that image is belied by the reality of inner-city areas like Glodwick in Oldham, where poverty, racism and political opportunism have deeply alienated a generation of British-born children of south Asian immigrants. In quieter times, Oldham is one of the few places in Britain where you will see that everyday sight of all south Asian cities—kids playing informal games of cricket in public spaces. For these kids, playing cricket and following and supporting Pakistan are among the redemptive moments in an often deeply frustrating existence. Hussain may have been born in Madras, but he is as alien to the world and the cricket of the Oldham youth as any white public school boy of yore.

In The Guardian, sports journalist Vivek Chaudhury lambasted the England captain: "If Hussain cannot understand why we do not follow England, then he has obviously spent too long being pampered by the cricket establishment and become disconnected from the experience of ordinary British Asians in this country. Either that or he has been hit on the head by a cricket ball once too often. Instead of attracting a new generation to the game, he has alienated them further. Few within the Asian community see him as a positive role model."

What was most disturbing for many—not only in the Asian communities—were the echoes of the infamous "Tebbit test". In 1990, Norman Tebbit, the former Conservative cabinet minister, questioned the loyalties and rights of British Asians when he asked: "Which side do they cheer for" when England play cricket against India or Pakistan? "Are you still harking back to where you came from or where you are?"

It is an indication of Hussain's remoteness from British Asian life that he seemed unaware that Tebbit's arguments had been overwhelmingly and angrily rejected by the Asian community. Tebbit's attack on second generation blacks and Asians rested on two untenable propositions. First, that national identity is a fixed and homogeneous entity; you can only be one thing or another, "Asian" or "English". Second, that whom you choose to support in a cricket match should have the slightest bearing on your rights or responsibilities as a citizen; if you don't support England, it shows you don't belong here.

Walking down my local high street in a densely populated inner-city London borough, I see evidence all around me of a world in which Hussain's reprise of the Tebbit test is an irrelevance. This is a neighbourhood full of sporting rivalries. We have Arsenal and Tottenham, of course, those twin legends of north London football, but we also have the no less fiercely partisan rivalry between Besiktas and Fenerbahce (there's a large Turkish population). In a minicab office, west Africans crowd in front of the television to cheer on any European football club with a west African in it. Irishmen in a pub raise a glass to anyone playing against the English rugby team. And when the Pakistanis play at Lords, the fans congregate outside the halal butchers, following the score on the radio. As I pass them by, their furrowed brows tell me all I need to know about the state of play.

In the face of such gloriously perverse diversity, Hussain's call for "one people, one cricket team" seems both futile and mean-minded.But in the context of the kind of persistent racism that sparked the riots in Oldham, it is also something much more worrying.

Young people in Oldham are being told by Hussain and his supporters in the media that they must jettison the 'Pakistani' or 'Indian' part of their identity and embrace 'Englishness'. On the other hand, they're being told by a section of their religious and community leadership that they must spurn "English" or "western" culture in favour of a traditional "Asian" identity. Then they face the far right and the police who treat them as second class citizens because of the colour of their skin, and regardless of any "national identity" they might qualify for.

Now they find that even a simple diversion like going to a cricket match to support Pakistan or India has become a suspect act. It's probably fortunate for Hussain that injury ruled him out of the second Test against Pakistan at Manchester. The reception from the local Asian fans—most of them muttering in thick Lancastrian accents—would have been anything but friendly.

(Mike Marquesee's latest book Redemption Song: Muhammad Ali and the Spirit of the Sixties is published in India by Seagull Books)