Narendra Modi: Pradhan Sevak Above All Else | By Nirmala Sitharaman

Once an outsider to Delhi’s power ­corridors, PM Narendra Modi learned the ropes like an ­apprentice and took the world by storm, writes Defence Minister Nirmala Sitharaman. 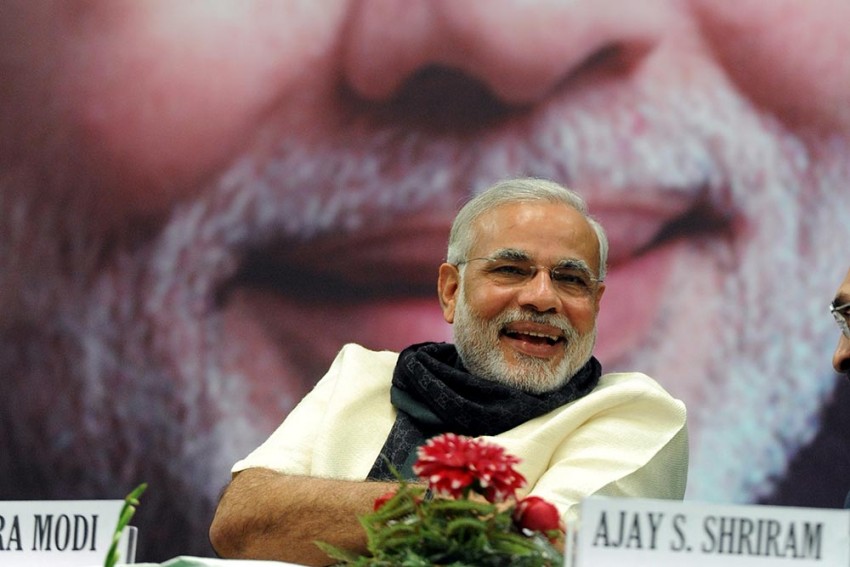 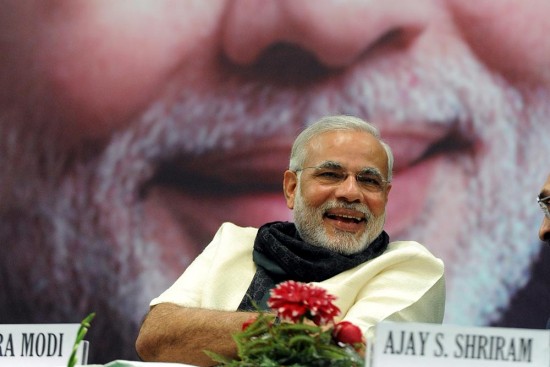 In this column, Defence Minister Nirmala Sithraman writes on PM Narendra Modi. "From the beginning of this century, for a decade as chief minister of Gujarat and for just over four years as India’s PM, Modi has made an indelible mark in the annals of our history," she writes.

This century is yet in its teens, but in India, without hesitation, we can name a change-maker of this century—Prime Minister Narendra Modi. From the beginning of this century, for a decade as chief minister of Gujarat and for just over four years as India’s PM, Modi has made an indelible mark in the annals of our history. The impact he continues to make in the ever-changing geopolitical landscape has positioned India on the high table of most of the global league.

Writing in 1872, Samuel Smiles, quotes Louis XIV in his book Character, “It is by toil that kings govern.” Elaborating this, Smiles writes, “It is the laborious and painstaking men who are the rulers of the world.” Modi is not rel­uctant at his work. Our people put him there as a pradhan sevak and he has put the nation above everything else. Not a day has he taken time off from work. In his initial days as PM, having been ‘an outsider’ to the government of India and Delhi, he gave time on the job to familiarise himself with its ways, just like an apprentice. But quickly he laid before the nation, from the Red Fort, his action plan.

PM Modi believes in detailed planning through extensive consultation. He is an example as a listener—no interruptions, no urgent phone calls, no distractions; he absorbs every input. He doesn’t hesitate to say he needs more inputs, another round of briefing, or more time to mull over. Scaling up and speed in execution are always factored in, keeping in mind the Indian topography and other ground realities. And, hence, many ideas that remained dormant until 2014 are seeing distinct achievements in these four years.

Financial inclusion is being achieved like never before through the JAM trinity—Pradhan Mantri Jan Dhan Yojana (PMJDY), Aadhaar and mobile phones. By the end of July 2018, over 32 crore bank accounts were opened. Nearly 17 crore of these accounts bel­ong to women. Over 24 crore RuPay cards are issued. Over Rs 80,000 crore is held as deposits in these accounts. Zero balance accounts have come down to 15 per cent from 57.9 per cent in March 2015. This has revolutionised the app­roach of providing credit to small businesses.

The Micro Units Development and Refinance Agency (MUDRA), launched slightly over six months after Jan Dhan Yojana, has distributed over Rs 6 lakh crore to over 13 crore borrowers (equals population of Mexico), of which over 74 per cent are women. A strong political will, assisted by better physical infrastructure and digital infrastructure, has helped in achieving considerable success in financial inclusion. In India today, banking facilities are extended not just through brick and mortar structures, but also through business correspondents, mobile vans and the ubiquitous internet.

A digital revolution is taking place in India today. The speed with which optical fibre cables are reaching down to the panchayat level, providing high-quality connectivity, is noteworthy. While it may be argued that such an effort was started several years before Modi, it is the speed with which the cables are being laid that has brought better days to those remote villages. Cell phone connectivity has spread with an unprecedented momentum. 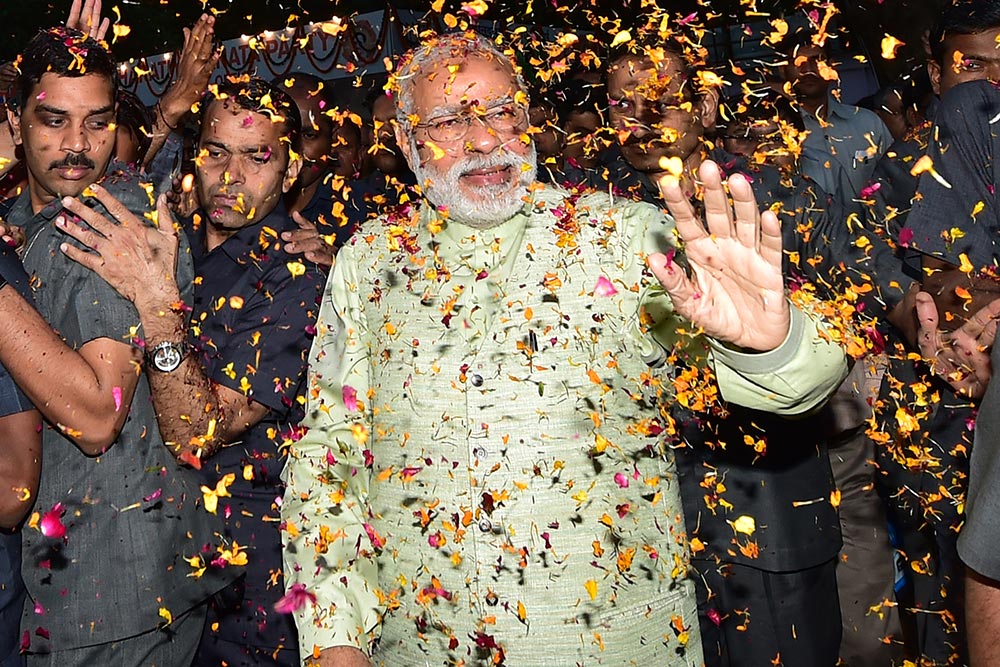 Photograph by Jitender Gupta
Away from ­breeding an ­entitlement ­mindset, Narendra Modi, the change-maker, is ­empowering ­people to stand up and be counted.

Over 80 crore people have a mobile phone with them. Over a quarter of our population will be using a smartphone by the end of 2018. The growth in this sector alone is the highest posted by any country in the world. Focussed and persistent effort by the government has ens­ured that this growth in mobile phone usage is supported by manufacturing in India. Mobile phone manufacturing in India grew exponentially from 30 lakh in 2014 to 1.1 crore in 2017, making us the second largest in the world, next only to China. PM Modi’s belief in Direct Benefit Transfer was force enough to give the necessary impetus for its efficient implementation. The force multiplier of this scheme was the real-time alert and information that every beneficiary with a phone (not necessarily a smart one) received. To possess a mobile phone today is no more a luxury, but only a catalytic tool for living with dignity.

It was recognised that women in poor households were facing health risks due to smoke-filled kitchens. The PM’s flagship Ujjwala scheme has reached five crore poor households, providing them free LPG connections. Over 44 per cent of these beneficiaries are SC/ST women. All this was achieved eight months ahead of the deadline.

Besides the above, rural electrification, weeding out archaic laws, unifying India’s market through GST and shifting India from a power-deficit to a power-surplus country are the transformational changes we have seen in the last four years under Modi.

Bringing in timely laws that are the need of the hour requires nimbleness to get through the necessary legislative processes. The GST, the Commercial Courts and the Fugitive ­Economic Offenders Act are examples of how Modi has brought in empowering chan­ges to the moribund system.

Reforming the banking sector can be a tightrope walk. Many eminent economists, despite being in the right places at the right time, baulked at the thought of getting banks back on their feet. They looked the other way even as crony capitalists were gnawing at their vitals. Typical of him, Modi kept his composure in the face of a grave sit­uation and diagnosed the NPA (Non-­Performing Assets) crisis. Speaking recently in the Lok Sabha, he explained how a catastrophic ‘landmine’ was spread out through the notorious ‘phone banking’ in the few years before he came. In India, in 70 years, our banks had given loans only up to Rs 18 lakh crore. In just six years from 2008, this total went up to Rs 52 lakh crore, through indiscriminate lending to friends and cronies, leading to the NPA crisis, which has stifled many commercial banks and left the banking system on the verge of collapse.

Handling such a situation even a bit carelessly would have shattered the confidence of the markets and the general depositors. To wring one’s hands helplessly and call it a legacy issue would be a lame but a safe option. For the PM, not reforming was not an option. Hadn’t he said ‘Sar jhukne nahin doonga’ during the Lok Sabha 2014 campaign? He came up with a plan to revive and re-energise the banks with additional liquidity, while simultaneously ensuring NPAs were legally resolved through the insolvency and bankruptcy code, with everyone’s dignity kept intact. This, however, did not mean wilful def­aulters went scot free. The Fugitive Economic Offenders Act comes in handy to legally confiscate the property of such defaulters.

Modi makes sure he doesn’t lose connect with the people in any strata. He talks directly with them through the All India Radio or video-bridges. This way he has brought out the stories of unknown Indians to the fore. It is this feel of the common Indian citizen’s pulse that made Modi revamp the Padma awards process. Today, the awards are rightly given to those who perform incredible deeds without any awards/rewards in mind.

In 1897, preaching to his monks, Swami Vivekananda had said, “Help men to stand upright, by themselves, and to accomplish their Karma-Yoga for themselves.” Away from breeding an entitlement mindset, Modi, the change-maker, is empowering people to stand up and be counted.