Nana Sahib And The Texas Detour

Visions of 'empire' pervade the coalition air. But it's born of force, not persuasion. 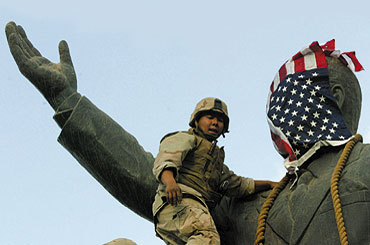 During the past few months, much has been said and written on the subject of a 'new American Empire'. I believe this term to be a misnomer. If the Iraq war is to be seen as an imperial venture, then the project is neither new nor purely American. What President Bush likes to call the 'coalition of the willing' is dominated after all by America, Britain and Australia—three English-speaking countries whose allegiances are rooted not just in a shared culture and common institutions but also in a shared history of territorial expansion. Seen in this light, the alignment is only the newest phase in the evolution of the most potent political force of the last two centuries: the Anglophone Empire. It is important to recognise this, especially for us Indians, for our history has been formed as much by the institutions of this Empire as by a long tradition of struggle against them.

I live in New York now and for me the September 11 attacks and their aftermath were filled with disquieting historical resonances. I was vividly reminded, for example, of the uprising of 1857. That year in Kanpur, a busy trading junction beside the Ganges, several hundred defenceless British civilians, including women and children, were cut down by Nana Sahib's followers in an orgy of bloodlust. Many of the leaders of the insurrections were erstwhile soldiers of the Empire who had been seized by nihilistic ideas. Their methods were so extreme that Indian moderates were torn between sympathy, revulsion and fear. Many chose to distance themselves from the uprising while others went so far as to join hands with the British. A similar process is clearly under way in today's Middle East, where Islamist fundamentalism has inflamed some Arabs while alienating others.

The phrase 'shock and awe', used by the United States military to describe the initial air attack on Baghdad, provided another reminder of the 1857 uprising. In the aftermath of the mutiny, the British too mounted a campaign to create terror and awe among the rebels' supporters. The road from Kanpur to Allahabad was lined with the corpses of Indian soldiers who had been hanged; there were public displays of rebels being shot from cannons. British soldiers sacked cities across northern India. The instruments of state were deployed in such a way as to reward allies and to punish areas and populations that had supported the rebels. The effects of these policies were felt for generations and can, arguably, still be observed in the disparities that divide, say, the relatively affluent region of Punjab and the impoverished state of Bihar.

The rights and wrongs of the British actions are not at issue here. I want, rather, to pose a question that is not articulated often enough: do such exercises of power work? Many believe that displays of military might are always erased or offset by countervailing forces of resistance. But those who are accustomed to the exercise of power know otherwise. They know that power can sometimes be used to redirect the forces of resistance.

In the case of the 1857 uprising, the truth is that the reigning power's brutal response resulted in some significant changes in Indian political life. Britain's overwhelming victory was instrumental in persuading a majority of Indians that it was futile to oppose the Empire by force of arms. This consensus caused many in the next generation of anti-colonialists to turn in a more parliamentary and constitutionalist direction, and was thus a necessary backdrop to Mahatma Gandhi's tactics of non-violent resistance.

Some of today's imperial enthusiasts have pointed to Indian democracy as proof that a colonial presence can be reconstructive, helping to create a stable civil society. To counter this argument, however, we need only to look at a list of cities where Al Qaeda's fugitive leaders are said to have taken refuge—Aden, Rawalpindi, Peshawar, Quetta, Lahore, KarachiThe British bestrode these cities for centuries and yet the antagonism to the West that simmers in them now is greater even than it was in 1857.

In the world of human beings, even defeat is a transaction. If there is any lesson to be drawn from the subcontinent's experience of empire, it is that defeat can be negotiated in many different ways. In India democracy thrives, while in Pakistan democracy has consistently devolved into authoritarianism. For Iraq to go the way of India, the current avatar of the Anglophone empire will have to succeed in creating, in the span of a few years, what earlier incarnations failed to do over decades.

The chances of success are close to nil. The strongest counter-indications are to be seen, paradoxically, in the very imbalance in military power which will probably lead to the toppling of Saddam Hussein's regime. The military power of the US is so overwhelming that it has caused American advocates of Empire to forget that the imperial project rests on two pillars. Weaponry is only the first and most obvious of these; the other is persuasion. When the Empire was in British hands, its rulers paid almost as much attention to this second pillar as to the first. Its armies were often accompanied by an enormously energetic apparatus of persuasion, which included educational institutions, workshops, media outlets, printing houses and so on.

Many hawks in the United States now openly admit to a veneration of past empires, yet they seem to have absorbed the military lessons of imperialism to the exclusion of all else. I suspect that this is the reason that many in the British political establishment were so dismayed by the build-up to the Iraq war. They know all too well that an aura of legitimacy and consent is essential in matters of empire.

Legitimacy and the tactics of persuasion are obviously not high priorities for the Bush administration. The task would be difficult anyway. In the 19th century, the apparatus of persuasion was effective partly because the colonising force could exercise close control over the flow of information. In Iraq, every effort at persuasion will be offset by daily doses of dissuasion, delivered through the internet and satellite television channels. The persuasive effectiveness of 19th century empires also rested in large part on the talismanic role of science. Today, high technology is too widespread to astonish. Although smart bombs are terrifying, they do not have the mystique that the Gatling gun once held.

The modern connotations of the word 'empire' also show how the context of imperialism has changed. For many, especially in America, it is a reminder of an image that played a significant part in discrediting the Soviet Union: the 'evil empire'. This is not a purely rhetorical anxiety; the unease goes deeper than that. A substantial proportion of America's population remains unconvinced of the need to undertake a new version of a 'civilising mission'. This is what distinguishes America from the imperial nations of the past.

As George Orwell and many other observers of imperialism have pointed out, empires imprison their rulers as well as their subjects. In today's America, where people are increasingly disinclined to venture beyond their borders, this has already come to pass. But perhaps, in these accelerated times, it won't be long before most Americans begin to dream of an escape from the imprisonment of absolute power.

Originally published in The New Yorker. Copyright 2003 Amitav Ghosh. For the full version of this article and more New Yorker coverage of the war in Iraq, please visit newyorker.com