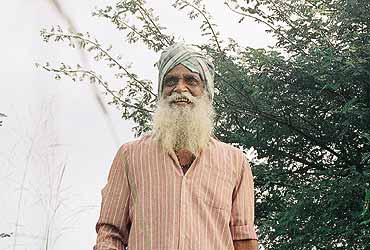 outlookindia.com
-0001-11-30T00:00:00+0553
It is very difficult to get an appointment with Nammazhvar—he is not available at any given address and is always on the move. He travels by night and educates farmers by the day. And he is at it all the time—because, in his words, "time is running out". One can meet this man of the soil only in action—on some farmer’s field.

Nammazhvar’s name has become synonymous with organic farming in Tamil Nadu. In the last one decade, he has "converted" about 6,000 farmers—which translates roughly into 20,000 acres—to "poison-free" methods of profitable agriculture. Poison is the only word in Nammazhvar’s organic dictionary for pesticides/herbicides/insecticides and chemicals that Indian farmers have been forced to use in the name of modernisation and mass production.

Ironically, Nammazhvar began his career in the very forums he fights today. Born in an agriculturist family in Thanjavur, Nammazhvar got himself a BSc in agriculture from Annamalai University and joined Kovilpatti’s Regional Research Station for Rainfed Crops in 1960 as research assistant. But this bearded 60-plus man was sceptical about agendas set in laboratories. "For three years, we never visited the fields. All research was in the lab. I suggested to fellow-scientists that we formally record the uselessness of our pursuits," he recalls. His friends said such frankness would spell the closure of their centre, but the agenda would remain. Three years later, Nammazhvar quit to look for more meaningful and sustainable ways of pursuing agriculture.

After the Green Revolution, he saw a pattern emerge: manufacturers had become rich and farmers debt-ridden. "Over the years, in the name of maximising production, the expenditure of a farmer increased manifold—seeds, insecticides, fertilisers, tractor... makers of all these products profited but farmers, especially those with small land-holdings, were in trouble," argues Nammazhvar.

After the drought of 1983 in many parts of the state and the subsequent floods, Nammazhvar realised that absence of trees was the cause of both disasters. He was associated with a Swedish-sponsored Rs 110-crore social forestry programme. He interacted with thousands of disillusioned farmers and in some areas like Killikottai, farmers said they knew of 52 varieties of trees. But none of these were teak or eucalyptus which they were encouraged to plant—"for making quick money"—by the establishment. "Neem takes such minimal effort to grow and teak is such a costly and risky affair. But our agriculture experts, with no ground experience, come up with these ideas and play havoc with farmers’ lives," says Nammazhvar.

He admits that profits cannot be expected in one crop when you shift to organic agriculture. Ethirajulu, a well-off urban farmer in Tiruchi, has been trying to set up a "model farm" for three years despite losses, because he can afford to experiment. "We need time and patience with organic farming but remember, harm has been done to the soil for over 40 years now," says Nammazhvar. But many small farmers, to whom every crop matters, are sceptical about this changeover because it is costlier and cannot be mass-produced. In 1990, Nammazhvar was associated with the setting up of Low External Input Sustainable Agriculture (leisa) in 10 districts with 3,000 members. His other brainchild is Kudumbam (family), a 20-year-old farm in Pudukkottai where a forest was raised from barren land in a few years.

You can see him go through the works on a farm. Nammazhvar combines physical activism with writing. He has authored six books in Tamil and of late, popular Tamil magazine Kumudam has been carrying a weekly feature by him. He does this "to raise consumer awareness and create a market for organically produced food" which right now is costlier—but healthier—than the "poison" we get in the market.

He is available to any farmer—big or small, urban or rural—who wants to move away from fertiliser- and chemicals-driven agriculture. Strangely, his wife, whom he "visits once in a while", does not buy his theories. She cultivates three acres of land and sticks mostly to modern methods. "I don’t stay much with my family. It could lead to unnecessary fights," admits Nammazhvar. He can be contacted at: R. Selvam, No. 203, evn Road, Erode—11; Ph. 0424-260504.

Where Is This Man Hiding?