The popularity of ‘Chicken 65’ is quite amazing; perhaps the only other dish that’s caught on as rapidly is Nelson Wang’s ‘Chicken Manchurian’. 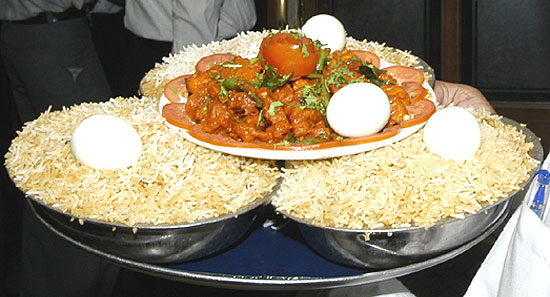 The popularity of ‘Chicken 65’ is quite amazing; perhaps the only other dish that’s caught on as rapidly is Nelson Wang’s ‘Chicken Manchurian’. There are many myths about how it got its name: that it contains 65 chillis per kilo of chicken; that the chicken is cut into 65 pieces; that the chicken must be 65 days old; or that it originated as item number 65 on such-and-such restaurant’s menu. The fact is, it was invented in 1965, at Buhari’s restaurant in Chennai. Remarkably, within five years it had spread all over India—by 1971 I’d encountered it in Mumbai.

Another myth is that Chicken 65 is a Hyderabadi speciality. That’s nonsense. But it hasn’t prevented Hyderabad’s eateries from jumping on the bandwagon. Like Bawarchi, for example. It serves a decent Chicken 65, if that’s your choice. But it’s better known for its biriyani, considered by many to be the best in Hyderabad. It’s a huge, 3-storeyed joint—yet you must queue 15 minutes for a table. It’s also a favourite of various Tollywood stars, who order from here. Coming back to Chicken 65, Buhari’s later invented a ‘Chicken 78’, but it sank without a trace. There’s a moral in this somewhere.