Not just a well-plotted police drama; it is also a serious examination of troubled relationships between friends and families. 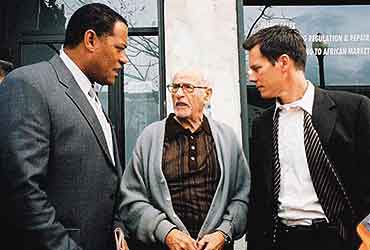 The river Mystic flows through working-class north Boston, through docks and wastelands as gritty and unfashionable as this absorbing, complex film based on the novel by Dennis Lehane. And location is all-important for this exploration of the darker side of human nature; the characters, however morally ambiguous, are created by their own community.

Mystic River begins in the '70s. Three Irish-American schoolboys, Jimmy, Sean and Dave, are playing street hockey, unaware their lives are about to change. Later, as they etch their names in wet cement on the pavement, two roving paedophiles posing as plainclothes detectives kidnap Dave. Though Dave escapes from these "wolves", the scars left on the boys' lives are as permanent as the marks on the concrete. Decades pass and friendships fade as their lives move in different directions. Jimmy (Penn) now owns a small store, Sean (Bacon) is a successful, work-obsessed policeman with a troubled marriage and Dave (Robbins) is a slow-moving, damaged casual worker who is over-protective of his young son.

The trio's paths cross again when Jimmy's 19-year-old daughter is brutally murdered; Jimmy, who we discover is an ex-convict, wants revenge—he teams up with former criminal associates to find the murderer before Sean, who's in charge of the investigation along with his partner Whitey (Fishbourne). And Dave, who met Jimmy's daughter in a bar on the night of the murder and came back home with blood all over him, is the prime suspect. From this complicated set-up, the plot twists and turns towards a gripping, dramatic climax.

Mystic River is not just a well-plotted police drama; it's also a serious examination of troubled relationships between friends and families. There are no special effects and the editing is occasionally jerky, slow and old-fashioned with long speeches being delivered in close-up or two-shot, detracting from the pace but allowing deeper examination of the characters.

What stands out are the superb involved performances from the ensemble cast. Apart from Penn and Robbins' Oscar-winning turns, Bacon is outstanding and Fishbourne's occasional wisecracks are all that stand between the viewer and lifelong depression. Despite the all-encompassing darkness, it's a great movie. But don't take the kids for this one.

DTH On The Pocket