Both Congress, BJP are mired in scams as polls loom 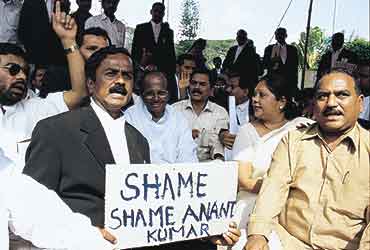 outlookindia.com
-0001-11-30T00:00:00+0553
Decibel levels are rising in Karnataka, a state which now seems headed for simultaneous Lok Sabha and assembly polls. And there's plenty of mud-slinging to go with it, since both the Congress and the BJP look tainted by scams. If the Telgi stamp scandal has damaged the Congress, the HUDCO scam involving state unit president and Union cabinet discard Ananth Kumar has the BJP on the backfoot. The result: a war of words followed by protests and counter-protests by both the Congress and the BJP.

Earlier, it was thought the Janata Dal would also be a key player. The JD(S) headed by ex-PM H.D. Deve Gowda, in particular, was seen to be making gains. But it now appears that the BJP and the Congress can offset this because of confusion among the other Janata splinter groups led by S.R. Bommai and Vijay Mallya. Thus, the continuous efforts of Gowda, who worked hard to garner support among the farming community, seem to have been in vain. In fact, there is even talk that some of his partymen may switch either to the Congress or the BJP.

Not that the BJP is on a sound wicket. The party doesn't have a single charismatic leader and state chief Ananth Kumar is a much hated figure even within. The Supreme Court notice to him on a PIL filed in the HUDCO scam hasn't helped either. The Congress was quick to launch an agitation demanding Kumar's arrest. All that the ex-Union minister had to say in his defence: "My colleagues and I are the target of smear campaigns."

The HUDCO scam was all about the organisation lending to the private sector at a low 7 per cent interest during Ananth Kumar's tenure as Union urban development minister. Even some BJP leaders now suspect that there might have been a quid pro quo. But even more than the corruption allegations, local BJP leaders are unhappy with Kumar's high-handed style of functioning. As one senior party leader put it, "People might pardon him on the corruption charges, but they will surely punish him for his arrogance." In the last five years, Kumar has managed to alienate a sizeable section of the senior party leadership in the state. In fact, the latter even tried to stall his appointment as president of the state unit and have been working against him within the party ever since.

The HUDCO PIL has reduced to naught the advantage the BJP had gained by drumming up the alleged links of some Congress leaders with Abdul Karim Telgi. The BJP even roped in retired DGP H.T. Sangliana who was instrumental in Telgi's arrest. The party plans to pit him against C.K. Jaffer Sharief in the Bangalore (North) parliamentary constituency. Ironically, the apex court's notice to Kumar came the same day Sangliana was inducted into the BJP in Delhi.

And it's not as if the Congress does not have its own share of problems. The party has to contend with a long list of failures—Cauvery, Veerappan, suicides set off by drought and online lottery debacles and erratic supply of power and water. The anti-incumbency factor is why party mlas would prefer assembly polls at the end of the term in September. MPs, however, have mounted pressure on the party leadership to go for simultaneous elections. That would force the legislators to work in their constituencies. The spinoff will be to the advantage of MPs since each parliamentary constituency has eight assembly segments.

To leverage whatever edge they can, both the BJP and Congress are trying to woo as many leaders from the late Ramakrishna Hegde's faction of the JD. The Congress has made overtures towards Hegde's family, even taking care of his medical expenses. Hegde's protege, industries minister R.V. Deshpande, has met the family to persuade Mamata Nichhani, the late leader's daughter, to join the Congress. But it's clear that no party is on top of the situation.The Congress feels it has the advantage of holding office but it could well be a liability.

Be In The Wig