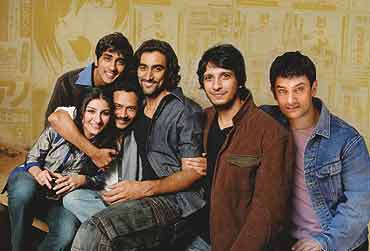 It has struck a unique chord with its target demographic: urban youngsters and the Indian diaspora. The film has started off exceptionally, earning Rs 22.8 crore worldwide in the first four days of release, and the first week's gross comes to about Rs 33.91 crore worldwide. It has emerged as Aamir's biggest opener in the overseas market. Released widely with about 600 prints over the extended Republic Day weekend, it is being dubbed by the trade pundits as a "class hit", a "multiplex success", "the Black of 2006".

But more than that,Rang De has turned out to be one of the most fervently debated and dissected films in recent times. Just log on to the web and you'll encounter passionate discussions. "The reactions are not just good, bad or nice but extreme," says Kunal Kapoor, who plays Aslam in the film. "Liking the film is one thing. Rang De has created a certain sweeping spirit," says Atul Kulkarni who plays Laxman Pandey.