"My Not Contesting Was A Crucial Mistake. I'd Have Led From The Front."

Former Karnataka CM and Maharashtra governor S.M. Krishna on what went wrong with the Congress strategy 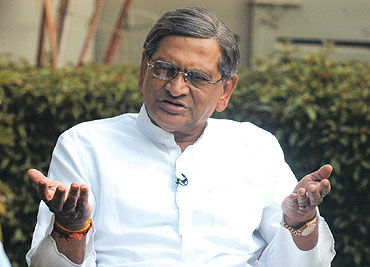 Former Karnataka CM and Maharashtra governor S.M. Krishna was asked to quit and head the Congress election management committee in his home state. But though he was rushed in to manage the campaign, he wasn’t allowed to contest. Krishna spoke to Outlook on what went wrong with the Congress strategy. Excerpts:

There is a feeling that if you had been projected as the CM, the Congress may have done well.

How can I say anything to that? Yes, there is a huge feeling among party workers that had they declared me as the chief ministerial candidate the party would have performed better.

In retrospect do you think you should have contested the elections?

My not contesting was a crucial mistake. I would have led from the front and the situation would have changed.

Was it a personal decision not to contest or was it imposed on you by the party?

I’d say that it was worked out that way...or it was agreed that I should stay away from the fray.

The Congress has been wiped out in your home district, Mandya. Do you think...