My Next Car Is A Bike! 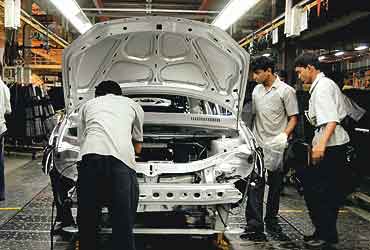 outlookindia.com
-0001-11-30T00:00:00+0553
Just hours after Union finance minister P. Chidambaram presented his budget this year, the CEOs of auto majors showered praises on his rural thrust. It was seen as a major demand booster for the industry and we-will-continue-to-grow-come-what-may seemed to be the common refrain among the chieftains. They didn't even mind the fact that the FM refused to accede to their main demand—reduction in excise duty on passenger cars from 24 to 16 per cent, as was the levy on two-wheelers and commercial vehicles. Those were indeed the heady days for the country's carmakers. And why not? Until then, the car market had grown at a frenetic pace for almost four years without a brake, selling over a million vehicles in 2004-05.

How did the mindset change now? These days, the one issue that senior managers at car firms talk about is why it's critical for the FM to pare excise duty. For, it's the only way to bring back the much-needed zing into the auto sector. The reason: car sales have dropped for two consecutive months—June and July. The fall in July, compared to the same month in 2004, was a steep 10 per cent, which was a shock for a segment that grew by 18 per cent in 2004-05 and a whopping 32 per cent the previous year. Demand estimates for the coming months are not too optimistic.

"Even if we manage growth in excess of 15 per cent for the rest of the year, we're still looking at an overall increase of less than 10 per cent," predicts Jagdish Khattar, MD, Maruti Udyog Ltd (MUL). Based on the assumption of a burgeoning demand for compact and mid-size cars, the Centre for Monitoring Indian Economy (CMIE), an economic think-tank, recently forecasted a higher 14 per cent growth this fiscal. They felt that despite a cumulative growth of only 7 per cent in Q1, the two segments could push sales during the rest of the year. But experts think the CMIE figure is an ambitious one and are reconciled to a lower growth rate this year. Suddenly, the buzz in boardrooms are about slowdown, downturn and, at best, deceleration.

One of the few to put up a brave front is the Society of Indian Automobile Manufacturers (SIAM), the industry's apex body, which states the dip is a temporary phenomenon abetted by various factors. One is the uncertainty due to the implementation of the value added tax (VAT). According to SIAM, since nearly 60 per cent of the buyers are traders who are directly affected by VAT, sales are bound to come down. And since VAT had not been implemented in the three major manufacturing states of UP, Tamil Nadu and Gujarat, the prices remained high as companies failed get the input credits. Two, the recent massive floods and rains in two of the largest markets—Maharashtra and Gujarat—also contributed to the less-than-impressive performance.

"We shouldn't forget that in April and May, before the floods, there were serious concerns about a bad monsoon. Besides, the regulatory changeover from the Bharat Stage II (bs ii) emission norms to bs iii in 11 major cities earlier this year has resulted in an increase in car costs which has impeded new purchases," explains an analyst. Yet another logic being forwarded is that the car base has gone up in the past few years and, hence, a lower growth phase is logical. "In the West, a positive business cycle lasts 28 months. Given the small base in India, we saw a strong growth for years. The slowing down for a brief while is only natural. All indications from our large clients is of a flat growth for some time," says Surinder Kapur, chairman, Sona Koyo Steering Systems, one of the biggest auto-components firms.

But several carmakers pick holes in such arguments. A senior executive in Toyota Kirloskar Motor points out, the vagaries of weather didn't affect the robust growth of the previous years. In addition, in July this year, medium and heavy commercial vehicles saw a 2.45 per cent drop in sales and, more importantly, the segment registered a 2.17 per cent fall in the first four months of this fiscal. "One can sense a slowdown when the sales of commercial vehicles fall—and cars too follow this trend," he adds. (SIAM counters that the negative trend in commercial vehicles was largely due to the increase in diesel prices and a non-increase in freight rates.)

Anang Dev Jena, head of Synnovate Motosearch India, a leading market research firm, reasons—it's not a question of the Indian market base becoming large. China, with more than two million car sales a year—or nearly twice that of India—is still growing at the same pace as India. Jena adds that the high-profile launches of two models, Toyota Innova and MUL's Swift, have failed to bolster demand. In fact, they have dented the sales of competing models. "Swift has not expanded the market but it has certainly eaten into the share of big players like Hyundai and Tata Motors which is reflected in the overall fall in sales over the last two months," he says. Khattar is quick to add that the current slowdown is not about new models only. "If it was only about Swift, a car in the premium hatchback segment, why are Alto and Maruti 800, which are not in the same segment, slowing down," he asks while making a strong case for reduction of excise duty on cars in the next year's budget.

So, there must be larger reasons for the negative growth rates. The fact is that consumers have postponed their buying decisions. This is especially true of the corporate sector, which accounts for a huge chunk of annual sales and has seen demand decline by 20 per cent in the April-June quarter. High global crude prices, at over $70 a barrel, have scared off buyers who are now sure that domestic fuel prices are bound to rise drastically in the near future. Both the FM and petroleum minister have hinted that consumers who, till now, were spared the impact of higher prices due to the political opposition to price hikes will henceforth have to bear the burden.

Higher interest rates have made cars more expensive; the regular hikes in prices of raw materials like steel have increased costs and, hence, prices. With the equity markets at an all-time high, some analysts also believe that consumers are postponing car replacements and using the same money to invest in secondary markets and new IPOs. Overall sentiments are so low that car firms are not even excited about the forthcoming festival season, when sales normally zoom.

The only positive signals for the auto industry is that consumer demographics have not undergone a sea change in the last couple of years, disposable incomes continue to be on the upswing; corporate profits grew by 45 per cent in the first quarter of 2005-06, and the economy is expected to grow by 7 per cent this fiscal. But the consensus on short-term demand is bleak. "This could turn out to be a low, single-digit growth year," says Rajeev Dube, senior vice-president, Tata Motors. His prediction will come true if the sluggish trend continues for a few months. But all this could mean a happy ride for consumers, who may yet be wooed with massive festival discounts.