My Name Is Green

Forged in the cultural ferment of a century ago, Islamic poster art in India thrived on the frontiers of taboo 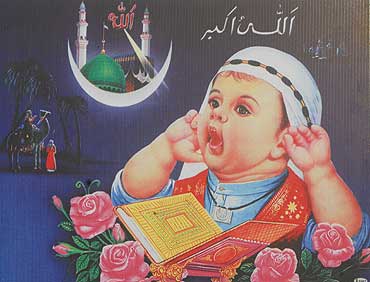 outlookindia.com
-0001-11-30T00:00:00+05:53
A chubby child-muezzin calling out to the faithful, a buxom bejewelled lady seeking a Sufi saint's blessings, the ornately wrought family tree of the Prophet Mohammed... these are just three images from the wide range of Islamic poster art that thrives in the Indian subcontinent, in spite of the taboo on representations of living beings. The lucky few to drop by New Delhi's Indira Gandhi National Centre for the Arts last week caught a glimpse of this popular yet little-acknowledged art form, in the first public display of its kind.

Islamic poster art originated in Turkey and Cairo at the end of the 19th century, with calligraphies and images of Mecca and Medina. Believed to bestow 'barakat' (blessings) and protection, these posters were framed and hung in shops and houses. When this art found its way to India around the turn of the 20th century, it evolved into a more vibrant and creative form, visibly influenced by the kind of Hindu calendar art produced by the printing press Raja Ravi Varma founded in Bombay in 1892. The decline of classical calligraphic art contributed to (and was itself hastened by) the instant popularity of these Islamic posters.

While Ravi Varma's press was best known for churning out his famed, iconic images of Lakshmi and Saraswati, it later also began to print posters with Islamic themes. Among these were popular Shia themes like the battleground of Karbala and images of the Burraq, a mythic beast with a woman's head and horse's body, said to have borne the Prophet to Jerusalem and through the seven heavens during his Mir'aj (ascension). Interestingly enough, since the same—often Hindu—artists created all these images, the Burraq shares its sensuous features with those of goddesses from the Hindu pantheon, Sufi saints resemble Guru Nanak, and plump, pious children look just like Lord Krishna.

Says sociologist and avid poster art collector Patricia Uberoi, "These posters use the aesthetic register of popular Hindu or secular iconography in their depictions of extremely luscious praying women with big eyes and lustrous hair." Prolific poster artists like Balakrishnan and H.R. Raja also improvised little syncretic additions, such as incense sticks in prayer scenes, and diyas flanking important pilgrimage spots like the Ajmer dargah or even the Prophet's tomb.

Though the Quran forbids idolatry, and certain Hadith discourage the depiction of living creatures and condemn the creators of such images to "terrible punishments" on the Day of Judgment, artists found unique ways to sidestep the taboo on representation. Says Yousuf Saeed, who has a rare collection of hundreds of these posters, "The absence of a deity makes artists more creative. They depict human figures through pictorial calligraphy, or illustrate passages from the Quran. For instance, one poster depicts a dense knot to illustrate the text: 'Hold on tight to the rope of God's message'."

Since Islamic images, unlike Hindu ones, can't depict divinity, the prayers themselves take on a special significance, and instructional posters show little boys in skull-caps poring over the Quran with their headscarved sisters. Others convey social messages about the equality of the faith, by showing richly attired namaazis praying alongside their bedraggled brethren. In conservative Muslim households where even portraits of family members are considered taboo, posters of attractive worshipping women can be displayed with a sense of assurance and legitimacy. With the faces of Bollywood actresses, and clad in clingy salwar-kameezes and diaphanous scarves, they also afford a certain sensual charge for those ostensibly gazing upon them with devotion.

To keep up with rapidly changing market demands, new themes are constantly being added to the old repertoire. During the first Gulf War in the early '90s, roadside stands were flooded with posters of Saddam Hussein. Today, aspirational pin-ups of Sania Mirza do brisk business. New image-editing technologies change aesthetics too. Eclectic collages of monuments, blooming roses and setting suns can now be effortlessly cobbled together. And the more daring even set photographs of the faces of living Sufi leaders on older hand-painted images.

Comments sociologist Imtiaz Ahmad, "What used to be pure forms of religious representation are diluted and secularised here. When religious symbols and figures are used with secular elements, they're not viewed with the same sanctity. Just as a Ganesha image has become an art object that can be placed anywhere, posters showing Kaaba, Karbala, Allah, Mohammed, alongside Taj and Red Fort no longer have any religious significance," he told Outlook.

Deobandi clerics like Maulana Nomani of the Jamiat Ulema-e-Hind are rather more trenchant critics: "There's nothing Islamic about art that depicts living beings, and portraying people is even more offensive." Concurs the All India Muslim Personal Law Board spokesperson Qasim Rasool Ilyas, "We've always protested against pictures of holy figures, lest they lead to idolatry. We don't want to become like Christians who worship images of Jesus."

One wonders what they'd make of the fact that in Iran, even posters of the Prophet can be purchased on the street. In India, though, their drive to 'cleanse' Islam is stifling the art form, and making it duller in the process, as Saeed has noticed. "Today, you won't find some of the posters I collected 12 years ago anywhere. Sadly, hand-painted images of Sufi saints have all but disappeared, due to the influence of Wahabi ideology. Printers play safe, sticking to themes like Mecca and Medina; avoiding things that might create controversy." It would be a pity if this uniquely Indian form of Islamic art were to be 'cleansed' out of existence.

'We Can't Afford For India To Wait For Emission Cuts'