The woman of new India is freer than ever before, yet bound by tradition 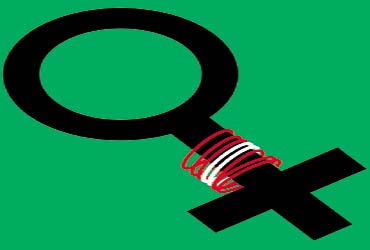 In its sixtieth year as an independent nation, India has just elected its first woman president and we are celebrating 'women's empowerment'. The demure Patil, with her head carefully covered, has ascended as India's head of state. The no-nonsense Kiran Bedi, with her crew cut and mannish trousers, failed to be promoted as Delhi's police chief. It seems as if in the age of 'new India', only a certain type of woman is approved of.

Today women's empowerment is a government slogan, it is the universal feature of every party manifesto. The officialising of the Indian women's movement has meant that society has been left to find its own definition of freedom. For millions of Indian women, it's not a talented woman like Kiran Bedi or even a professional politician like Pratibha Patil who is a role model. Instead, it's the heavily made- up and bejewelled, husband-centred glamorous figures of the soap operas, with their hair full of sindoor and their minds full of domestic politics, who are figures to be emulated. In urban India, across income groups, when it comes to individual freedom—as opposed to the collective freedom of equal opportunities in education and at work—that freedom is often defined as simply the freedom to be constantly sexy. The Indian woman is so sexy and beautiful that she's forgotten to be independent.