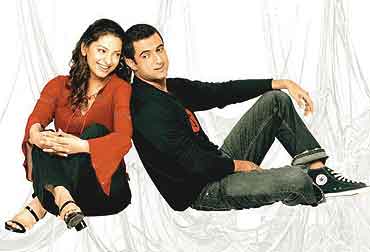 One obvious sign of evolution in Bollywood would be the unconventional relationships films have begun to portray and the maturity and subtlety with which they're handled. My Brother Nikhil tackles homosexuality without treating it as an ugly joke, a dirty alliance or an aberration. The gay relationship here is not designed to shock the audience or make them feel queasy but is so "normal" that the two lovers seem just like any other couple: intimate yet jealous and insecure, happy but quarrelling, sharing and facing up to an imminent loss. It's the love and faith that matters whether it is man-woman, man-man or woman-woman. My Brother Nikhil may not be as nuanced and profound as Wong Kar Wai's Happy Together but has honest creative ambitions that make it very touching.

Then there's the other bond: a sibling love which goes beyond the silly behen-bhai rakhi songs. In fact it's the sacrosanct parental love that comes under the scanner—with the parents abandoning their child in a moment of crisis. The story is inspired by a real-life incident that took place in Goa in the late '80s. State swimming champ Nikhil (soft-spoken Suri, at last, gets a role to dig his teeth into) has a doting mother (Dubey) and an ambitious father (Banerjee), a friend of a sister Anu (twinkle-eyed, utterly likeable Chawla) and a committed lover Nigel (competent Kohli). This happy universe collapses when Nikhil tests positive for hiv. He is ostracised by his parents, friends, society and finds himself holed up in a dirty sanatorium. Only Anu and Nigel stand by him.

The stylised narrative device of making the characters speak to the audience is obviously inspired from Gus Van Sant's To Die For. The film shows Nikhil's trauma without going into why he got the disease. It wasn't a "perverse" gay relationship that led to aids. The harrowing experiences and humiliation is reconstructed minimally. There's not an ounce of drama which can at times alienate and make the film too facile and cursory. However, it's indubitably one of the most decent, well-intentioned films of recent times which has just one cause, that of human dignity.