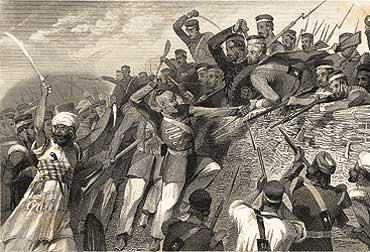 Romila Thapar "I don't like committees. I won't be able to make it for the Prime Minister's July 13 meeting."

Ramachandra Guha "I wasn't asked if I wanted to be in on it...historians were perhaps added as an afterthought."

Shyam Benegal "While there's no problem in marking 1857, following events have been an uncomfortable chapter."

Bal Apte "Historians haven't done justice to Veer Savarkar. No celebrations could take off without acknowledging him."

For over a year the government has been poring over history books to map out a programme itinerary for the 150th anniversary celebrations of 1857. As it conjures up this moveable feast of history to mark the year India's freedom movement officially began, one in which it hopes to involve Pakistan and Bangladesh too, the last thing the government would have wanted is a controversy. But in an ironic twist, there is a mutiny of sorts brewing in the very expert committee instituted to chart the commemorative calendar.

Murmurs of dissent broke out just days after a Group of Ministers (GoM) cleared a budget of Rs 150 crore for a tableau of events beginning August 2007. The committee, headed by Prime Minister Manmohan Singh, is a mish-mash of politicians, bureaucrats, academics and other public personages. The ones to raise the banner of revolt are the historians on the panel. They don't wish to be part of the sarkari celebrations. Noted historian Romila Thapar categorically...