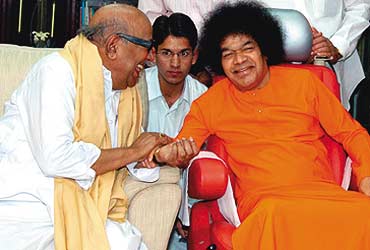 Satya Sai Baba of Puttaparthi, famous for his line, "Miracles are my visiting cards", in an unprecedented gesture last week called on Muthuvel Karunanidhi, the chief minister of Tamil Nadu, reputed to be an unrepentant rationalist, and left with him a few visiting cards. At the CM’s Gopalapuram residence in Chennai, wife Dayalu Ammal prostrated at the godman’s feet, as K. Duraimurugan, PWD minister in the DMK government, and Dayanidhi Maran, Union IT minister, competed for the Afro-haired Baba’s "miracle rings". Sai Baba, 81, is reputed for producing...