I would say Ustad Allaudin Khan ... despite the fact that Baba, as all musicians fondly know him, taught music in the earlier part of the century ... 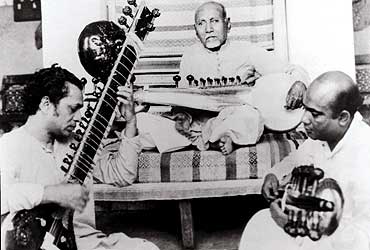 outlookindia.com
-0001-11-30T00:00:00+0553
I would say Ustad Allaudin Khan is the musician who's made the most significant contribution to the world of music in independent India. I say this despite the fact that Baba, as all musicians fondly know him, taught music in the earlier part of the century. Almost every prominent instrumentalist of the past 50 years has learnt his music from him. Though I was younger and did not formally learn from him, all my seniors who I regard as the doyens of classical music—Ustad Ali Akbar Khan, Pt Ravi Shankar, Pt Nikhil Banerjee, Pannalal Ghosh, Pt V.G. Jog, Annapurna Devi and, indirectly, Hariprasad Chaurasia—were his disciples. He was the fountainhead of the Maihar gharana. Every student of his can recall his strict but paternal stance while teaching. Learning and Hindustani sanskriti was above religion for him. Despite being a Muslim, he climbed atop a steep hill twice a day to bow in front of goddess Saraswati who presided over the temple there.

Baba's playing style was unique. He was the greatest teacher of the century. While he enforced the strictest discipline in learning—he is known to have whipped errant students—he let his students develop and cultivate their strengths. This is more than evident in the huge difference in the personalities and styles of students like Pt Ravi Shankar and Pt Nikhil Banerjee. While both went on to become doyens of sitar playing, they have vastly different styles. Baba played several instruments and is known to have played the sarod with both his hands. However, his towering personality never cast a shadow over budding talent. On the contrary, his presence in people's lives kept a harmonious balance of dhoop and chhaon, such that latent talent blossomed with his blessings. He taught his students how to maintain the purity of art and yet approach it fearlessly, to discover freedom in the discipline of Hindustani classical music.

Unlike the norm in Hindustani classical music, Baba was never shy in imparting knowledge to a worthy shishya outside the family. So while Ustad Ali Akbar Khan is his son, every other student also grew as dramatically.

Though I never learnt from him, his influence on my thinking, on my philosophy has been deep-rooted. I see vidya daan, or imparting knowledge, as a duty and have never charged students. I see teaching as much as my duty towards music as learning and performing.

Unfortunately, there has been little material on Baba's work. Ustad Ali Akbar Khan is now working on developing a catalogued archive and I have been learning and working along with him. As I do so, the greatness and the mastery of this incomparable musician continues to unfold in front of me.