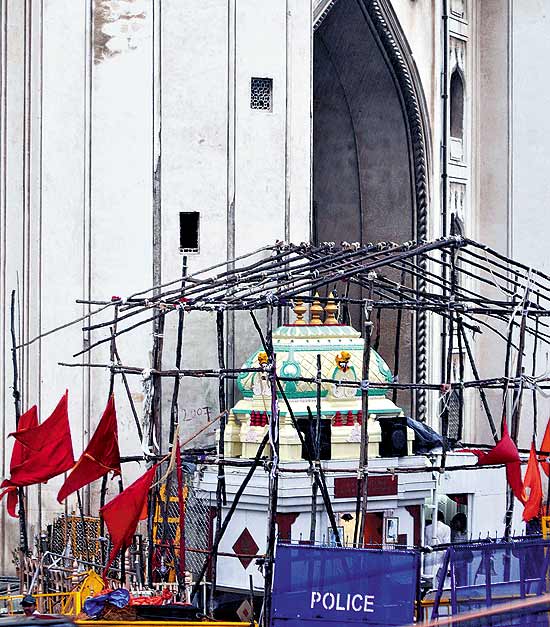 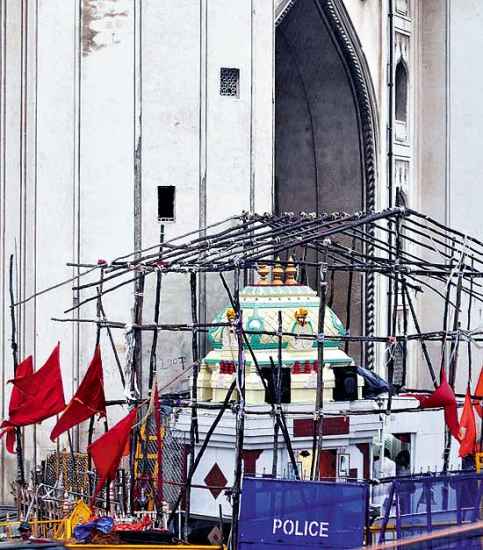 It has been for Hyderabad what India Gate is for Delhi and the Howrah Bridge is for Calcutta, a symbol of the city’s rich heritage. The 56-metre-tall Charminar, built in the late 16th century, graces almost every brochure about Hyderabad; the area around it is described as a bargain-seeker’s paradise. Now, it has become ground zero for the city’s latest communal conflict. The bone of contention is the small temple constructed beside the Charminar, and abutting on one of its four minars.

Even in 2010, the temple was much smaller, the police presence minimal. The structure, with its surrounding bamboo poles and canopy, is difficult to miss now, and a police checkpost tells of the simmering tension in the area. Large trees that flanked the Charminar police station and kept it out of view have been cut down, as if to afford a better field of view and deter trouble-mongers. Small traders like Sheikh Abdul Ghani say the Bhagyalakshmi temple’s size has increased over the last one-and-half years: “Woh grill aur canopy, lakdi, poore dedh saal mein aaye.”

An 8-by-10-feet structure flanked by bamboo frames with a tarpaulin-covered roof almost stuck in front of the Charminar’s south-eastern minar, the controversial Bhagyalakshmi temple is protected by a 24-hour police checkpost, and is open from 5 am to 10 pm. A company of 85 RAF men, 20 APSP officers, and mobile police vans patrol the area.

“I’ve visited the Charminar since the late ’50s; there was no temple. A small shrine had come up only in the late ’60s.”
Anuradha Reddy, State INTACH convenor

The 10-feet-high temple has a steady stream of visitors, mostly local Marwaris from Ghansi Bazaar, Hussani Alam, Ali Jah Kotla and nearby areas—mostly goldsmiths and small traders. Some tourists to the Charminar also visit it. On Fridays, the rush of devotees is high. The temple has two parts, one occupied by the goddess’s idol, the other a storage room. It also has running water and electricity. On the inner side of the same south-eastern minar, next to the entrance, is the Hazrat Ghouse-e-Azam Dastagir chillah, where Muslims offer prayers. The minar and the temple face the Nizamia General Hospital.

On the night of October 31, the lime screen (or jaali) on the roshan daan of the minar was broken to accommodate the fixing of a tin roof for the temple. Trouble brewed soon afterwards. In the violence that followed over the next two weeks, vehicles were burnt, people assaulted and shops closed down.

A well-known ASI stipulation prohibits the building of any kind of structure within 100 metres of a protected monument. But the Bhagyalakshmi temple seems to have slipped through such a stricture, helped, no doubt, by the apathy and negligence of authorities.

Majlis-e-Ittehadul Muslimeen (MIM) president Asaduddin Owaisi, who recently withdrew his support to the Congress government over the issue, moved the Andhra Pradesh High Court and on November 4 obtained a stay order on any construction on the site. While the issue gets a communal colour, most political parties like the Congress Telugu Desam, TRS and YSR Congress are steering clear of the controversy. It appears to be a straight-out battle between the MIM and the BJP.

“There’re serious alterations to monuments all over Hyderabad. Authorities are not even ashamed to admit violations.”
Sajjad Shahid, Conservation acivist

Since the temple has existed for years, many wonder why the MIM, which ignored it for long, has suddenly made it their prime complaint against the Congress. Some others say the MIM’s splinter group Majlis Bachao Tehreek’s growing strength and comfortable equation with some saffron groups has something to do with the temple’s sudden, bold refurbishment plans. Political analysts say that the MIM, keen to assert its strength in Hyderabad, feels the Bhagyalakshmi temple is a perfect, legitimate platform to raise its pitch.

Meanwhile, heritage experts and historians wonder how the ASI and the government allowed a protected heritage structure to be vandalised this way.

State INTACH convener Anuradha Reddy was the first to raise a voice, with photographs from her collection showing the Charminar without a temple by its side. Reddy, 64, has since then been frequently questioned about her political leanings. “I am telling everyone that I belong to the Monument Party,” she says, laughing. “I have been visiting the Charminar from the late ’50s, and there was no temple there then. The photos I took when young and later prove the same. In the late ’60s, a small shrine came up with a photo and a diya. After a truck ran over a milestone around 1969 near the Charminar, it was replaced with a new one. A fencing came up then, and so did a small structure,” Reddy recollects.

Reddy explains that the concept of village goddesses and small shrines is common in Telangana, as elsewhere in India, and it’s not uncommon to see such shrines spring up by the roadside or under a tree. The Bhagyalakshmi temple appears to have a similar origin. Captain Panduranga Reddy, a researcher on Telangana and its customs, says he will soon be filing a PIL in the high court to seek relocation of the temple. “Even if one were to go by Agama shastras, there is no goddess by the name of Bhagyalakshmi. It is non-existent in Hindu iconography. Some people have simply named it after Hyderabad’s historic name, Bhagyanagar,” he claims.

Capt Reddy, who sought information under the RTI Act from the Greater Hyderabad Municipal
Corporation, says according to GHMC records, there are 900 temples in the twin cities. “I sought the information last month and there is no mention of the Bhagyalakshmi temple in records,” he asserts. However, according to State Endowment Department records, the temple is classified as a C(II) (6C) category institution that comes under the jurisdiction of the Hyderabad I Inspector Division of the Endowments Department. It bears the code no. 1722.

Historian and author Narendra Luther, who came to Hyderabad as a young IAS officer in the ’60s, says there was no temple near the Charminar then. “Later on, I noticed that there was a small idol where people placed coins. People who say Mohammed Quli Qutub Shah, who built the Charminar, also built a small temple next to it are being plain ridiculous,” Luther says.

While the ASI and the state’s archaeology department are being blamed for napping as the temple grew, and it is being asked how the whole affair was not brought before the Heritage Conservation Committee (that regulates any modification of, and construction near, heritage structures), conservation activist and HCC member Sajjad Shahid says the damage is obvious. “There are serious violations and alterations to monuments all over Hyderabad. The state government is not even ashamed of admitting it can’t protect its monuments,” says an angry Sajjad. The magnificent facade of the Charminar, already fading because of poor conservation, now seems to be battling to hold on to its own space.

In A Wave Of Bullets