Maulana Fazlur Rehman, chief of the pro-Taliban Jamiat Ulema-e-Islam (JUI), has been put under house arrest in his hometown Dera Ismail Khan for leading protest rallies against the US and the Pakistani government. Asim Hussain managed to speak to him 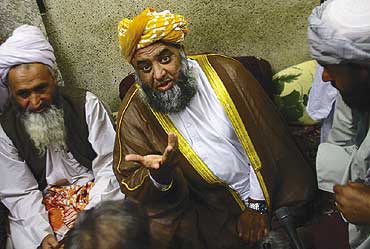 outlookindia.com
-0001-11-30T00:00:00+0553
What is your response to the situation in Afghanistan?
The attack by the US and its allies on Afghanistan is terrorism against humanity. It's yet another display of US barbarism. We'll launch jehad against them and their 'stooges' in Pakistan. The jui cannot sit idle and see the entire world, particularly Pakistan, being taken hostage by the US in its Afghanistan mania. The Musharraf regime will have to face dire consequences for becoming a tool in the hands of the Americans.

Will you target the US troops if they land in Pakistan?
Yes, we can't allow our soil to be used against our brothers.

What about the army you said you'd raise to help the Taliban?
We'll not put anything on record.

Are you mobilising world opinion?
All countries, particularly the Muslim states, are committing "suicide" by blindly following the US in its onslaught on Afghanistan. It is like giving a sword to a maniac who can use it against anyone anytime. The US is implementing a conspiracy to replace Afghanistan's Islamic government and to control other potential Muslim powers of the region. The US has virtually pushed the entire world against Muslim countries. It only needs a spark to begin World War III.

Don't you think the Taliban should display flexibility in its stance?
It is foolish to believe that this war is just about capturing Osama bin Laden. Even after 10 years, Iraq is still being punished for becoming a Muslim military power. Taliban chief Mullah Omar has clarified that the Osama issue could be solved through international law and bilateral dialogue. Without giving any proof of allegations against bin Laden and without laying down any reasonable definition of terrorism, the Bush administration, its allies and the entire western media have put the label of terrorism on Muslim resistance movements against oppressive, illegitimate regimes.

Your advice to the US?
It must analyse the root causes of terrorism, which is directly linked to its unjust policies and its hysteria to rule the world. It must remove the anomaly between its words and deeds.

Did the Pakistan government have any other option?
Rulers must realise that the demands of the US would keep swelling until Pakistan has been denuded of its nuclear power, jehadi groups, religious institutions and its Islamic identity.

Do you believe the US will keep its promise of financially bailing Pakistan out?
I doubt any real help will be given to Pakistan as long as it has the potential of becoming a Muslim military power that could threaten US interests.

Why are anti-US rallies successful only in Pashtoon-dominated areas?
It's a misconception. I led rallies countrywide and elicited immense public response. The strike in Karachi was so successful that not a single shop or roadside kiosk opened. Large rallies were also taken out in interior Sindh, Baluchistan, Punjab and the nwfp.

Are you in contact with bin Laden?
No, but I have good relations with the Taliban government.