As whacky as its title 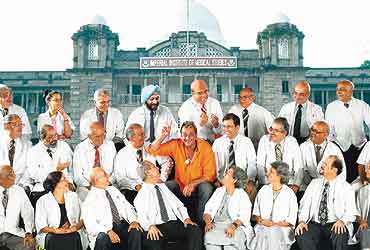 Vidhu Vinod Chopra's Munnabhai M.B.B.S. is as whacky as its title. A kind-hearted goon, Munnabhai (Sanjay Dutt) makes a living out of recovering people's legitimate dues through illegitimate means. This intermediary between debtors and creditors aspires to be a doctor to please his father (Sunil Dutt) and tease his no-nonsense to-be father-in-law, Asthana (Boman Irani), who is a dean in the medical college. The self-styled don's transformation from one who breaks bones to one who has to count them in a human body is funny at times. But the intended humour falls flat at other times. Scenes showing Munnabhai's compassion towards the patients and staff in the hospital, where he is an intern, have been scripted purely to activate the tear-ducts of the audience.

The plot is too simple. Even if one makes a concession, considering that the film is a light-hearted comedy, there are areas that needed to be tackled far more sensitively. For instance, the ease with which Munnabhai gets admission into a medical college looks farcical. His brazen defiance of the college rules is equally disturbing. The sub-plot about a girl being arranged for a young boy (Jimmy Shergill) who is dying of cancer may have been inspired by Manto's short story, Woh Paanch Roz. But a fair section of the audience may find it repulsive. Romance is conspicuous by its absence. Besides, since the drama is set mainly in the hospital and the basti, the visual appeal of the film is restricted. More exciting locations, at least for the songs, would've worked wonders. Witty dialogues and free performances lift the routine screenplay and the film itself to a somewhat respectable level. For a first-timer, Rajkumar Hirani's direction is fair. He, however, needs to understand that brevity is the soul of wit—and a hit, too! Anu Malik's music is a letdown.

Sanjay Dutt is endearing in a likeable role of a don-turned-wannabe-doc. Gracy Singh, as his love interest, is passable. Sunil Dutt has very little to do and so also Rohini Hattangadi. Arshad Warsi is spontaneous as Munnabhai's best buddy. Finally, Boman Irani gives the film that special zing to make it entertaining. He complements Sanjay Dutt brilliantly and even outshines the actor in some scenes.