Muddy Waters Flow Through This Channel 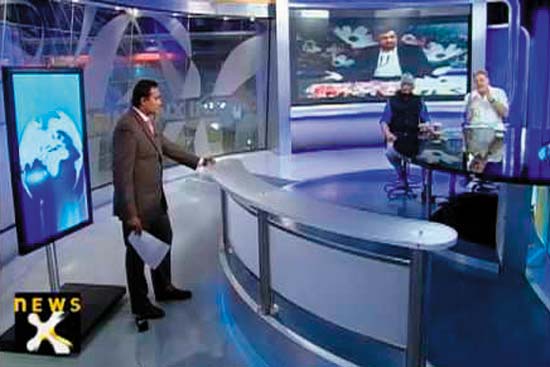 Just days before the Mukerjeas exited NewsX, India’s first high-definition news channel they founded through a series of dubious deals, there was much nervousness in the news room. The nascent channel was to go off air, NewsX had run out of money was the buzz. But the Mukerjeas sent a hugely reassuring letter to all employees. “It was not in our blood to betray the trust of our employees....” they said and that they were not going anywhere. Six days later, NewsX was sold off, the Mukerjeas had exited.

It later emerged that the Mukesh Ambani-owned Reliance Industries Limited and a group of investment bankers had actually bailed NewsX out. What was not known is how the Mukerjeas were using, in the words of a NewsX insider, the channel as a retirement plan. Subsequent details of how the Muker­jeas, RIL and others cheated shareholders and investors have come out in an investigation by the Serious Fraud Investigation Office (SFIO).

Lesser known is the fact that then Union finance minister P. Chidambaram had ordered an investigation in 2008 about the source of the funds of the channel. Then i&b minister Priyaranjan Dasmunsi had forwarded Chi­dambaram a complaint of NewsX staffers who were suspicious at the source of funds (and upset at the treatment meted out to them).

Notices were sent to the Mukerjeas and other promoters, causing uneasiness amo­ng investors who felt the inquiry was bec­o­ming messy. This, added to the fact that investors were unhappy with the finances of the company, was perhaps why the Mukerjeas were finally shown the door. But the full extent of their messy financial dealings became public only after the 2G investigations blew up and Niira Radia was named in a preliminary enquiry report by the CBI. Her company Neucom Con­sulting Pvt Ltd and its dealings with NewsX were investigated by the SFIO.

So how did Indrani Mukerjea become the majority shareholder of NewsX through a maze of companies? Insiders say investors like New Silk Route, Temasek Holdings and New Vernon Private Equity realised too late in the day that foreign companies could not invest more then 26 per cent stake in a news channel, though they could own 100 per cent equity in an entertainment channel. Enter the Mukerjeas with a proposal that they would hold the shares on behalf of these fiis. The catch was Peter Mukerjea himself was a British citizen. So M/s Indrani Incon Pvt Ltd became a company that had a maze of investors but the face was the glamorous CEO with a mystery past, the toast of Wall Street Journal who listed her along with Indra Nooyi amongst the top ceos to watch out for.

It wasn’t just the clever financial wranglings of the Mukerjeas that initially the promoters of Temasek Holdings wanted probed, even threatening to prosecute them. TRP ratings of the group’s entertainment arm 9x were being added to NewsX and a rosy picture painted to promoters of how well the news channel was doing. Indrani, with no background in television, was heading the programming department which had a budget of Rs 350 crore or roughly Rs 1 crore a day. Insiders suspect kickbacks in commissioning of shows and even in the cable distribution business.

TRP ratings of the entertainment channel 9X were added to NewsX to show how well it was doing.

It is not just the Mukerjeas, the original promoters like New Silk Route are not known to be angels either. Four of the six co-founders, including Rajat Gupta of McKinsey fame, have been investigated for insider trading or securities fraud in the United States.

The SFIO report says that Indrani Mukerjea signed loan agreements by which loans were received from the promoter group companies of Reliance India Ltd. Shares valued at Rs 10 carried a premium value of Rs 208. The share transactions themselves reek of suspicion. In the sale of shares between 2007 and 2009, the cost of the shares rose by only one paisa. Then, the shares were sold on January 7, 2009, at Rs 10 only, though they carried a premium of Rs 208.24. The SFIO report questions this sale. The sales were manipulated just to accommodate entries.

The report submitted to the Union ministry of corporate affairs in 2014 clearly says that amongst other directors, Indrani Mukerjea was “liable to be prosecuted under Section 120B (conspiracy). All these individuals conspired in the gameplan of causing wrongful loss and in accomplishing the dishonest intention of cheating the companies M/s INX Media Pvt Ltd and IM Media Pvt Ltd. The directors...played conduits to the entire premeditated plan.”

SFIO investigations in l’affaire Niira Radia were constrained by the fact that it was given no access to the Radia tapes, as also Radia’s illness. In fact, the report candidly admits it relied on taped transcripts as made public by Outlook to carry out its investi­gati­ons. If investigators were to scratch the surface, the intricate maze of financial deali­ngs will perhaps help Mumbai police crack the motives for the murder of Sheena Bora.