The grandpere of modern Indian agriculture and chairman of National Commission of Farmers was honoured with France's highest civilian award Commander, Merit Agricole 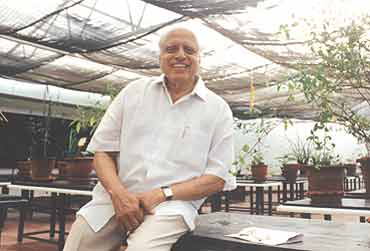 You have said we could learn from the French in agriculture. How?

French Agriculture is highly specialized and concentrates on high value crops like grapes for making wine. France also cultivates rice, wheat and other food crops. The cost of production is high and therefore the government gives adequate support to farmers to ensure their economic survival. However, France has only about four percent of its population engaged in agriculture. In contrast we have nearly two thirds of our population depending on agriculture for their livelihood.

We should also learn how to ensure the economic viability of farming. Unfortunately today most small farmers are unable to earn enough income. This is why the NCF in its Draft National Policy for Farmers has suggested a major rural non-farm livelihood initiative. The economic viability and survival of farmers and farming constitute the bottom line of the agricultural policies of France. We should emulate this example.

What do you think of the PM's package for the Vidarbha farmers?

The PM’s package is designed to provide opportunities for resource-poor farmers to restart their farming operations. It is however not adequate to solve the basic maladies of the agriculture of Vidharbha. NCF has made several recommendations on how to safeguard both the livelihood security of the widows and the education of the children who are victims of the agrarian crisis. The most urgent is assured and remunerative marketing of cotton. The problems of Vidharbha – social, economic, meteorological and marketing-- should be studied in a holistic manner.

Is it possible for the government to implement all of the NCF recommendations?

The NCF recommendations are both actionable and affordable. In fact, we have been keen not to make recommendations that aren’t implementable. It is not only the affluent countries like USA and France who provide life-saving support to their farmers but countries like China too ensure that farming remains an attractive and viable profession.

Many suggest that food security is an outdated concept and we should focus on products where we have competitive advantages. Your reaction?

In another 40 years our population will be nearly 150 crores. The diversification of livelihood opportunities in rural India is taking place at a very slow pace. Food is the first among the hierarchical needs of a human being. Therefore, nutrition security, which implies the economic, physical and social access to balanced diet and safe drinking water to every child, woman and man, should be a fundamental responsibility of government. While we should certainly grow crops where we have both a domestic need and export possibility, we should not neglect food crops that will provide the energy to farmers to grow the other crops. We certainly have a comparative advantage in wheat, rice, pulses, millets and many other food crops. But it will be a criminal act to neglect food security and concentrate on increasing the income of a few well to do sections of the rural society. Also, food can be an important political weapon and we will be sacrificing national sovereignty if we neglect food security.

The production of coarse cereals and pulses has fallen sharply and is unable to meet their demand. How can we revive them?

The production of coarse cereals and pulses has gone down because there is no arrangement for assured and remunerative marketing. If marketing opportunities are provided, the production can be doubled very quickly. It will also be wrong to call nutritious millets like ragi, bajra, jowar etc coarse cereals. Such a "caste system" among cereals should be abolished as soon as possible. It is only then a green revolution will take place in dry-farming areas. We are importing pulses from countries where the genetic material in crops like pigeon pea (arhar) went from India. We should ask ourselves why pulses, which are native to India, are unhappy in their homeland, and are happy in adopted homes in foreign countries.

How do you react to the recent moves in water--privatisation in cities and charging full price for water from farmers in the villages?

In my view, privatization of both food and water security are beset with grave dangers. Already, we have the largest number of malnourished women, children and men in the world. As mentioned earlier, nutrition security also involves access to clean drinking water. Sustainable water security is a basic need. Instead of privatizing water sources, we should promote Jal Swaraj based on community water harvesting and management systems. The million wells scheme recommended our first report of December 2004 needs to be implemented without further delay.

Do you think the absence of land reform and clear land titles even 60 years after independence is the main reason why most farmers are losing out?

Land reform has been implemented with seriousness in West Bengal and Kerala. The other states also should complete the process of redistributing the ceiling surplus land to the landless poor. We also need aquarian reform which will help the poor to take to aquaculture in inland ponds and reservoirs. Since land is limited our approach has to be one of asset reform dealing comprehensively with land, water, livestock, fish pond, forestry and non-farm livelihoods, so that every individual has an opportunity for earning the minimum amount needed for a healthy and productive life.

Many outdated laws are restricting Indian farmers from taking full advantage of the market. Do you agree?

The NCF has dealt with in a comprehensive manner the question of moving towards an Indian single market. We have also recommended an Indian Trade Organisation to ensure the work and income security of our rural population. If these are implemented our farmers will be able to take full advantage of the market in a fair manner. At the moment only traders and importers are happy, since they can make a lot of money without even seeing an agricultural field.

Why are the state governments and the Centre reluctant to reform agriculture or think of the interests of the smallholders who are the majority?

China started its economic reform with reforms in the farm sector. They also started concurrent programmes for on-farm and non-farm employment. Unfortunately we have been silent spectators to the poverty and misery experienced by more than 50 percent of our population. Many Committees and Commissions have made numerous recommendations in the area of agricultural reform, but unfortunately there has been no integrated and holistic attention or action. If the suggestions made in the Farmers’ Policy are implemented, we can see the beginning of a new chapter non only in our agricultural history but also in our nation’s economic progress.

In the post-WTO era, we have to clean up the path from the plough to the plate. How can we do that?

We can achieve progress in linking conservation, cultivation, consumption and commerce in an effective manner provided agriculture becomes a professional department in state and central governments and provided the political system will not allow ‘turf wars’ among Ministries and Departments.