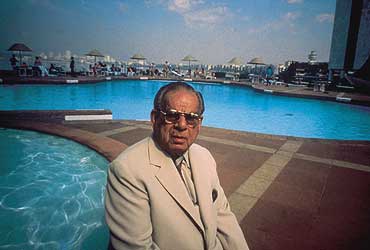 He opened the first five-star international hotel of India at Delhi in 1965. And 37 years later, when he died aged 101, nine of his properties had a place in the Leading Hotels of the World. J.R.D Tata, a competitor, called Rai Bahadur Mohan Singh Oberoi, the father of India's hospitality industry, India's "most exclusive hotelier". Like all legends, M.S. Oberoi began humbly, as a clerk to look after the coal supply, at the Cecil Hotel, Shimla, at a salary of Rs 50 a month. He acquired his first property, Clarke's Hotel, in 1934 through a loan from his uncle. Overjoyed, he told his daughter: "When you grow up, there'll be an Oberoi Hotel everywhere you go." Seven years later Oberoi was to acquire the Associated Hotels of India which owned the Cecil and Corstophans in Shimla, the Maidens and the Imperial in Delhi and a hotel each in Lahore, Murree, Peshawar. The group now has 28 hotels—14 each in India and abroad. "The compulsion was to think big," he said receiving the Newsweek award in '77, "and to offer the best. I knew that name and profits would follow."