Dignity in a high place, personified by a quiet, assertive sardarni 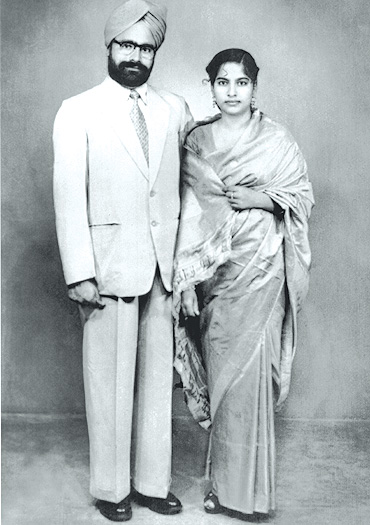 outlookindia.com
-0001-11-30T00:00:00+0553
It is rare in Indian social and political life to find persons who have risen from obscurity to pre-eminence but have not fallen victim to self-importance, arrogance, hubris. If not them, it is members of their family who flaunt their close relationship to the achiever of eminence, to enhance their own status. The one exception I have run into is our prime minister, Manmohan Singh, his wife Gursharan Kaur, their brothers and sisters, and their three daughters. It is not surprising that most people do not even know who the prime minister's and his wife's relations are, and what they do to earn their livelihood.

Despite being on nodding terms with Manmohan Singh for almost 15 years, I knew very little about his background and not even his wife's name till after he became prime minister of India. All I knew about her was indirectly through my grand-daughter Naina Dayal, then studying in St Stephen's College. She was very taken up by her history professor, Dr Upinder Kaur, married to a fellow professor of philosophy, Vijay Tankha. Upinder Kaur was Naina's role model. She was her teacher's favourite student. Upinder was the eldest daughter of Manmohan Singh, then finance minister in Narasimha Rao's cabinet.

I was invited by Anil Wilson, then principal of St Stephen's, to give away prizes and certificates of merit to outstanding students. Before being ushered into the main hall where the students were assembled, I was introduced to members of the staff. When Wilson introduced me to Upinder Kaur, I asked her: "Are you Manmohan's daughter?" She nodded and mumbled, "Yes." I sensed she had not divulged this to her colleagues. When it came to giving away certificates of merit, I found my grand-daughter among the award-winners. Although she saw me every day, she had not told me about it. It was something she had learned from her teacher.

I occasionally met Manmohan Singh before he became prime minister. I canvassed for him when he was Congress candidate for the South Delhi Lok Sabha constituency. He lost to the BJP's Vijay Kumar Malhotra. After he became prime minister, I didn't see him. I got news of his household from my next-door neighbour Reeta Devi Verma who was, and is, in and out of the prime minister's residence. And from my friend Surbir Chhatwal of the IFS, who was his contemporary in Cambridge. It was through Reeta that I got to meet Gursharan Kaur.

It was a brief meeting. My first impression of her was of an unassuming, genteel, soft-spoken, comforting personality. Attractive in a homely sort of way: fair, buxom, dressed in a simple salwar-kameez with a pearl necklace round her neck. We exchanged polite banalities for a few minutes. I felt she should not be wasting her time on me. So I told her in Punjabi: "Gursharan, hun tu ja—now you go."

I had to do this at subsequent meetings as well. She was with her husband when he released my Illustrated History of the Sikhs (OUP) at the Le Meridien Hotel. In my thank-you speech, I indicated that no alcohol would be served till after the prime minister and his wife had left. They left immediately after the launch.

On another occasion in the same hotel, she stayed on late, enjoying tea and pastries. I was tired. I pleaded with her that I wanted to go home and could not leave till after she had left. "But I don't want to go home yet," she replied like a stubborn schoolgirl. "Manmohan is not expecting me back till later." I persisted in my plea and saw her to her car. She made fun of my boorish manners when she launched my translation of the Gurbani.

I wrote a profile of her in my column, based on what I had picked up about her background from friends of her family. I got a few facts wrong. I wrote her a letter of apology and suggested she come again to put me right. She wrote back (always in Gurmukhi) telling me not to worry and said she would get back to me soon. 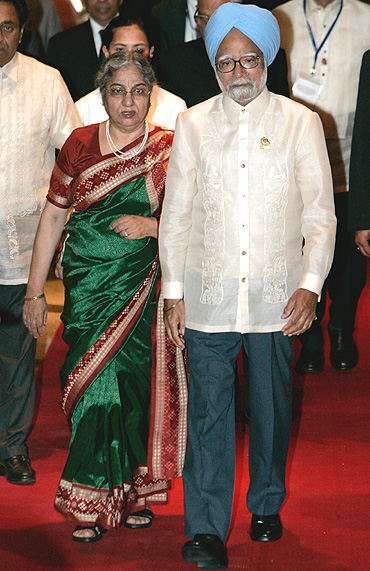 Perfect halves: His prime ministership places demands on her that she meets well

She came. No fanfare of police escort cars with screaming sirens or flashing red lights. She saw my daughter and grand-daughter strolling on the lawn in front of my flat, stopped her car and joined them. Then the four of them, including Reeta, trooped into my sitting room where I awaited her beside a blazing log fire. I began my interrogation.

Gursharan Kaur's family came from Dhakam village in Jhelum district. They were in a small trading business. Her father studied only up to matric and got a clerical-level job in Burmah Shell. They paid their junior staff well. He was able to send his children to school wherever he was posted. Gursharan was the third of his five daughters and son. (They all live around Delhi but no one has heard any of them boasting about their relationship).

Gursharan was born in Jalandhar in 1937. Soon after, her father was transferred to Nowshera near Peshawar. Her early schooling was in a Singh Sabha school for girls. "Were you good at your studies?" I asked her. She smiled, "Average. Not like Manmohan. I managed to pass my exams. I was more interested in games and in singing Gurbani."

She was ten years old when her father was transferred to Amritsar in May 1947. They were lucky to escape the massacres that accompanied the partition of the country. Most of her schooling was in Amritsar and Patiala. She went to the Guru Nanak Kanya Pathshala for her matriculation and the Government College for Women in Patiala for her graduation. She got her BT (Bachelor of Teaching) from Khalsa College, Amritsar. She intended to be a school teacher.

Manmohan's family had migrated from Gah village in Chakwal district, now in Pakistan, to Amritsar. He came with a formidable reputation for scholarship. He had won a stipend to do his tripos from St John's College, Cambridge. He topped with a first class first and took a teaching job with Punjab University, Chandigarh. His parents were looking out for a suitable bride for him. Hers were looking for a suitable match for their third daughter. Both were Kohlis, a sub-sect of Kukrains, comprising Anands, Chaddhas, Sahnis and some others, who prefer to marry within the biradari.

They got engaged without ever having seen each other, but were allowed to meet after the engagement. They got married in 1958. No time was wasted on romance. Their first child was on the way almost immediately after their marriage.

The couple liked life in Chandigarh. They built themselves a small villa with a garden space in Sector 11, within walking distance of the university campus, and planned to settle there. That was not to be. In 1961 Manmohan got a scholarship to do a doctorate from Nuffield College, Oxford. This time, he took his wife and baby daughter with him.

I asked her whether she joined some institution for further studies. "No," she replied, "we always had a stream of relatives and friends descending on us. All my time was taken up making chapatis and cooking dal. Whether it was Oxford, Chandigarh, New York, Bombay, Delhi or elsewhere, for me it was the kitchen."

Though the cliche describes the wife as the better half, a more fitting description for Gursharan would be to say that she played second fiddle—caretaker and cook for her husband and three daughters. Though she did not go to a finishing school, she imbibed some western sophistication when Manmohan was with UNCTAD in New York for three years, professor at the Delhi School of Economics for three years, governor of the Reserve Bank of India in Bombay, and finance minister, before becoming the prime minister of India. But the image of Gursharan as just a housewife would be deceptive: she is also the power behind the throne.

The two make an ideal couple in the Indian tradition: strictly loyal to each other, with an abiding faith in their Gurus and religious traditions. I asked her whether she had ever questioned the existence of God. She looked uneasy and replied: "How can anyone? Our Gurus taught us to believe in God." I changed the subject.

"How did you take to Upinder's decision to marry a Hindu?" I asked. She conceded that they resisted it initially, but gave in because she was quite determined to marry him and he was a nice person.

When Manmohan was back at the Delhi School of Economics, they bought a flat in Ashok Vihar, a congested, middle-class colony. There was a peepal tree across the road which soon had a temple built around it—clanging bells, conch shells blowing, hymns being chanted almost round the clock. "We could not work or sleep. So we gave it to Upinder and her husband and shifted to a professor's quarters at the Delhi School of Economics. We were lucky. In November 1984, a mob of goondas tried to set fire to it, shouting: 'Sikh ka makaan hai, jalaa do.' Vijay Tankha stepped out and confronted the mob, shouting back: 'This is my house. I am a Hindu.' The mob didn't touch it."

It is their religion that has taught them the virtues of humility and uncompromising honesty. It is hard to believe that after the positions he has held, all they own today is their little home in Chandigarh and a DDA flat in Delhi. (He bought an apartment in Guwahati only to qualify as a voter and be elected to the Rajya Sabha.)

It is harder to believe that with a modest education, Gursharan Kaur is able to discharge the duties expected to be performed by the wife of a prime minister with such accomplishment and grace. She is a person of great dignity, speaks very well in Hindi, Punjabi and English, exudes warmth, and makes everyone feel comfortable.

The interview lasted over an hour. I ran out of questions. She asked me: "Can I leave now?"

"This time I did not ask you to go," I replied.