Bhagat is neither catty nor chatty. There is nothing new about our Iron Lady here. 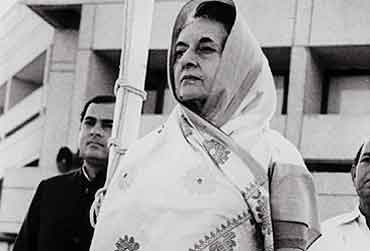 Indiraji Through My Eyes
By Usha Bhagat
Penguin/Viking Pages: 312; Rs 595
One of Indira Gandhi’s personal secretaries was Amie Crishna, who was General Thimayya’s sister. She once told me, "I have worked for her for more than twenty years, but I cannot claim to know her." Another of her secretaries, Usha Bhagat, was not so self-effacing. She always considered herself more an intellectual companion than a secretary. In her own words, "Mrs Gandhi and I shared many similar interests and tastes, in a quiet way I tried to keep her informed about various happenings in the cultural sphere. Communication between us was never much based on words, but more in the nature of osmosis. Somehow I think we understood each other." For her part, Indira Gandhi told her, "You are a person of quality which is rare enough anywhere in the world. That is why I find myself unable to treat you just like anybody else. To have you around has meant a great deal to me."

With this kind of build-up, one would, of course, expect Bhagat to come up with instances of confidences and assessments of persons and events that Indira Gandhi had shared with her. But Usha Bhagat was not a Dorothy Norman, who "was like a mother, friend and agony aunt", in whom Indira Gandhi confided things she told no one else. She was a great one for maintaining distances. There were moments when even her father felt cut off from her. Usha Bhagat realised she could not cross this barrier.

People are always curious about life in high places. The book is neither catty or chatty. It provides no new insight into Indira Gandhi’s married life or the way she brought up her sons (both of them had been Usha Bhagat’s pupils). All we get is her observation that Sanjay needed a firm, fatherly hand. There is an amusing episode of Bhagat trying to get Sanjay to learn the tabla. The drum ended up as teapoys in no time. The book could also have told us how Sonia Gandhi Indianised herself. There is a reference to Sonia doing the cooking during the days Indira was out of power. This is the kind of theme that a perceptive writer would have developed.

The table of contents lists separate chapters such as ‘Sanjay and Maneka’, ‘Sanjay tastes power’ and ‘Maneka’ which whet our appetite. But the fare provided is thin. Of Maneka’s expulsion from the family, Bhagat learnt the details only from the press. She is chary about making value judgements, and prefers to go by what other authors like Mary Carras, Katherine Frank, Marie Seton and P.N. Dhar have written. Why memoir writers think that their foreign travels interest readers is forever a mystery to me.

Usha Bhagat’s work in the prime minister’s house underwent many avatars. She joined Indira Gandhi in 1953 on the recommendation of Elisabeth Gauba, whose kindergarten school Rajiv and Sanjay attended and where Usha Bhagat taught. She describes her elation at receiving her first pay cheque signed by Jawaharlal Nehru himself. Soon the major domo of Teen Murti House, M.O. Mathai, jumped into the act and appointed her as his own personal assistant though she continued to work for Indira Gandhi.

When Mathai had to quit in 1957, she lost her job. She resumed working for the government when Indira Gandhi took charge of the Indian Pavilion in the New York World Fair in 1964. She now had a PA of her own. Guess who it was? R.K. Dhawan. When Indira Gandhi became prime minister, Bhagat assumed the designation of social secretary. She wanted to leave her mark on cultural policy like Pupal Jayakar. So in 1980, when Indira Gandhi returned to power, Usha Bhagat secured an office in the South Block for herself as officer on special duty.

Indira was a compulsive writer of letters. They bring out the best side of her caring, sensitive nature. She also scribbled innumerable notes, which convey instructions but also reveal her humour. For example, "No one ever noticed my hair-do." "Please do conversational Hindi with Sonia. The progress of Hindi teacher seems to be non-existent."

These little slips of notes carried fascinating doodles. It is good that Bhagat has given a liberal helping of these. Bhagat found her saheli to be "at the same time complex and simple, familiar and aloof, naughty and humble, sociable and lonely, tough and vulnerable, gentle and harsh." All this has been said before. It is not easy to write a significant book about someone on whose life so many attempts have been made. In her introduction, Bhagat remarks: "Really speaking, I do not know myself why I have written this book" and confesses she yielded to pressures from people who invariably accosted her with the question, "When are you writing a book?"