Not afraid of being wrong, Sen pens a candid memoir, recounting what spurs his creativity 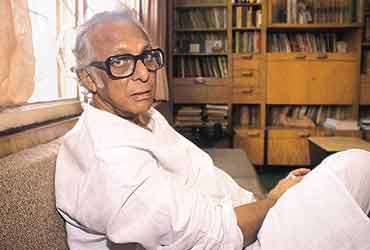 Always Being Born: A Memoir
By Mrinal Sen
Stellar Publishers Rs 395; Pages: 310
In 1970, Mrinal Sen's Interview and Satyajit Ray's Pratidwandi (The Adversary) opened within two weeks of each other. Though extremely different in style and content, both films essentially dealt with a young man's search for a job in politically incendiary Calcutta. Naturally, torrid debates raged in cineaste circles about who was the superior aesthete of youthful angst. And nothing highlighted the difference between the two approaches more than the interview sequences. In Pratidwandi, Siddhartha, asked what he believes is the biggest event of the last decade, answers: "The Vietnam war." In Interview, Ranjit is asked: "What's the biggest event of the day?" and replies: "My interview." Ray's response to the times was intellectual, Sen's visceral. (In Always Being Born, Sen reveals that he heard of this particular piece of dialogue in Pratidwandi, and inserted the question in Interview.)

It is impossible to write about Sen without bringing in Ray, for the two of them—of similar age, starting their film careers in the same year, both steadfastly refusing to ever leave their beloved Calcutta—represented quality Indian cinema to the world for decades. Yet they are chalk and cheese. Ray's unit of social analysis was the individual, not class, while almost all of Sen's films are explorations of class. Ray clinically pursued "rightness" in every frame. Sen says he has always made his films following Niels Bohr's dictum: "Confidence comes from not being always right, but from not fearing to be wrong." His memoirs embody the same principle.

These are reminiscences written with high passion, straight from the heart and entirely unafraid to bare a soul in public. Under the uneven and sometimes jarring prose, with its abundance of italics and exclamation marks, throbs a mind that has never refused to engage fervently with the world, never ceased to be affected, never retreated from voicing an opinion. It is actually about not fearing to be wrong.

In 1955, Sen made his first film, Raat Bhor (The Dawn; 1955), but hated the result ("the point was not just to decide what to say, because I did not know how to say it"). "Humiliated", he took up a salesman's job. Five unsatisfying months later, one day on the outskirts of Jhansi, he had an epiphany. Returning to his hotel, stark naked in his room, shouting at his own reflection in the mirror in disgust and ecstasy, Sen realised his inevitable calling in life. He returned to cinema, never to deviate from it again, even though it often meant financial hardship and bitter disappointments with critical and public response.

It's interesting to read about the inspiration behind various films or particular sequences, and get a glimpse into the mind of an artist. One night, while shooting Akaaler Sandhane (In Search of Famine), Sen dreams of an incident 20 years old, and wakes up to add what will turn out to be a crucial sequence to the screenplay. One sleepless night, he wanders to his bookshelf and chances upon a classic story that he has read many times before, and "for the first time, I read cinema hidden in its lines and between the lines". The result is Khandhar (The Ruins). But chance and spontaneity, Sen reveals, have been an integral part of his creative process. A remembered image from childhood could suddenly add a new twist to his story; memorable scenes were often totally improvised on the sets. In fact, the book could have done with more such anecdotes.

With his penchant for ambiguous endings and unambiguous naming of spades, Sen has always had a volatile relationship with his audience.Viewers of the gritty Ekdin Pratidin (And Quiet Rolls the Day) kept asking him where the Mamata Shankar character had spent the night (her not returning home on time triggered off the entire chain of events). Sen writes that he did not know, and (rightly, in my opinion) that it did not matter.In Kharij (The Case is Closed), Sen exposed middle-class hypocrisy more brutally than any Indian film-maker ever. The film died at the stiles, because even the "liberal" Bengali went into denial. As Sen explains, "It's a slap on the face of my own class." And of course, he is proud of it.

Apart from being a film-maker's account of his career, this book is also about the two great loves of Mrinal Sen's life. One is Calcutta, which he refers to simply as "my city". The other is his wife, emotional anchor and intellectual companion, Gita. Sen's attachment to both shines through every page of Always Being Born. At the end of which, the publishers, even if they are, like Sen, unafraid of being wrong, could surely have added an index.

Chronicle Of A Crisis Foretold