The Prez frees the partnership of its implied caveats Updates 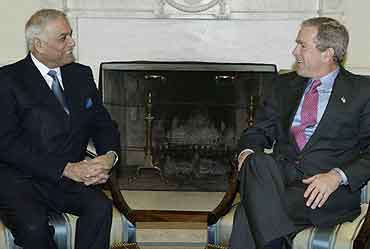 outlookindia.com
-0001-11-30T00:00:00+0553
A White House that takes pride in staying "on message" was clearly irked by the murky spin Washington bureaucracy put on the landmark Strategic Partnership with India. This week, President George Bush intervened to bring in line the wandering roadshow his large government sometimes becomes. He met foreign minister Yashwant Sinha on an extremely busy day, and regretted the way a visionary announcement was turned into negatives, an official told Outlook.

Both Bush and Prime Minister Atal Behari Vajpayee would have preferred a positive spin on the January 12 announcement on Strategic Partnership—how the two democracies will cooperate in space, on earth and in the cyber world. But a senior US official, who briefed reporters, conveyed the opposite. The tone, body language, and substance of the briefing stressed the negatives. That the agreement was conditional to India tightening its laws, that it might take months if not years to implement, that US concerns about India’s nuclear weapons remain high, that this is just the beginning so don’t pop the champagne and on and on. The Indian side expressed disappointment. Even the transcripts of the ‘controversial briefing’ were withheld.

US officials later said they were trying to address conflicting agendas of the non-proliferation lobby, the Pakistan-sensitive crowd and segments of the US Congress who might see this agreement as an assault on established ways. The status quo is always easier. The State Department is worried about Pakistan’s interests as the White House engages in a love fest with India. As if to check this euphoria, Christina Rocca, head of the State Department’s South Asia bureau, was named to lead the Strategic Partnership from the US side. Rocca is not counted among the enthusiasts by either side. It was a signal that the tussle between an eager White House and a cautious State Department isn’t over.

Bush, however, decided to cut through the bureaucratic tangle and make amends. He reiterated his commitment to India not only by meeting Sinha on one of the busiest days on the political calendar (January 20)—he was to deliver his annual State of the Union address—but also by discussing the ‘next step’ in the strategic partnership before his key cabinet members. The message was not to be lost again. His spokesman, Scott McClellan, promptly announced the partnership will "increase stability in Asia and beyond". A courtesy call by Sinha, confirmed only the night before by the White House, had turned into a goodish meeting. Bush ordered coffee, chatted about the Indian elections and expressed admiration that Vajpayee was taking political risks in an election year by trying to make peace with Pakistan.

As Sinha met Secretary of State Colin Powell, the tone had already been set. The meet covered a whole gamut of issues and ended with a warm hug. Sinha delicately stressed the importance of "quiet diplomacy" in the subcontinent. Subtext: Powell’s abundant references to the US role in the Indo-Pak thaw aren’t helpful. Indian officials have been agitated by the Americans claiming credit, however obliquely, specially because they feel the peace initiative was purely Vajpayee’s.

An Indian official said the hoopla about the US role "can tie up the PM’s hands". Pervez Musharraf, already painted as an American lackey by the jehadis, will also suffer from a looming US presence. But Powell may have his own political compulsions—the Indo-Pak rapprochement is a plus in an American election too.