If Bengali mainstream cinema lives today, it's because of the efforts of actor Prosenjit 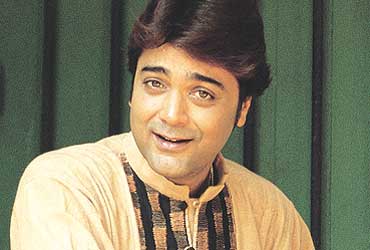 outlookindia.com
-0001-11-30T00:00:00+0553
Mahalakshmi Studios at Tollygunge is in a stupor. The heat is merciless on the outdoor set of Ek ar Sansar (One More Family). Thirsty pie dogs scamper by, listless unit folk gather in knots to share a smoke. Things roll only after the King arrives in a bumpy brown van. A parasol springs open to shade the hero, Shato di is yelled for to bring a hair brush, and there is a general flurry in the proceedings. Film director Haranath Chakraborty can't resist a pun: "The 'action' begins in Tollygunge only after Prosenjit comes in."

It sure does. Prosenjit Chatterjee, 40, all acknowledge, is the man responsible for rejuvenating Bengal's mainstream cinema today. It is a world far removed from the prosperous scene of Bollywood or the power-wielding regional cinema of the south. Bengali cinema fell into a rut after the demise of its towering hero Uttam Kumar and later its legend Satyajit Ray. It made news periodically when its small group of filmmakers and actors received applause at international festivals or notched national awards. But the mainstream industry of Tollygunge collapsed, unable to offer either intellect or money for sustaining its technicians, actors and junior-level network of employees.

"Bumba changed all that," says Sudeshna Roy, filmmaker and Prosenjit biographer. With maniacal drive, he has been ushering changes into the rudderless industry since the mid-'80s to resuscitate Tollygunge. He borrowed scripts from Tamil and Telugu melodramas ("I always have a stock of the latest hits by my bedside," he says unapologetically), collaborated with like-minded directors to churn out family melodramas and cheesy action flicks at a supersonic rate. Why not, he counters. Bengal's folk theatre jatra is hugely popular even today and films that pander to that high-octane culture have captive audience. Says filmmaker Rituparno Ghosh, "Prosenjit has single-handedly taken the industry forward, keeping the lot of Tollygunge from going bankrupt. His native intelligence and technical acumen is a rare feature in a superstar."

Prosenjit is also credited for introducing cinemascope format and mainstreaming colour in Bengali cinema. He kickstarted the regional satellite TV network, ushered in non-linear editing and is currently planning to open up the overseas market for Bengali films. He doesn't drop Bergman or Ghatak's names. Yash Chopra, Mani Ratnam, Tapan Sinha and their mainstream gloss is what he wants Tollygunge to acquire. Tollygunge currently rustles a modest Rs 50 crore turnover a year with some 40 films made each year. Prosenjit, the highest paid star in Bengal, has had a big hand in delivering consistent hits for the past five years and assuring profits.

Off screen, Prosenjit has pleasing good looks and his manners bespeak a pleasant old world courtesy. "Bumba is keen on treating the elders with respect and commands the same," reveals Roy. Po-faced, he reveals his diet mantra: three packs of cigarettes, 18 hours of work, juice, mudi and boiled veggies. Bulimics probably eat more. "I am a stickler for morning pujas," he offers in appeasement.

He also toils, and how. From vetting scripts, supervising songs, ghost-directing to designing posters. And his audience loves him no less. In Nadia district, Ranaghat Talkies exclusively shows Prosenjit films and remains closed when there are no new releases of his. Bumba fan clubs abound. Two years ago in Bolpur district, over a lakh of onlookers gathered for his darshan and the riot police had to be called in to control the mobs. At a premier show of his directorial debut, Purushottam, a fan bit his cheek to mark a bloody kiss and the Burdwan boudi's heart breaks if Prosenjit's character dies on screen. "Unlike Uttam Kumar who could preserve his enigma and who did not fight the pressures of TV, Chatterjee has fought a tougher battle to retain his star status in these times of over-exposure," says Rituparno.

For Tollygunge he is Godfather; off the sets too, settling disputes within the fraternity. A Bumba da temper can affect the entire unit and he can brood, informs a filmmaker. Says upcoming hero Jishu Sengupta, "I touch Bumba da for all help, be it a date problem with my films, choice of roles or my personal woes." Prosenjit's home is equally open to that spot boy who knocked his door at 2 am requesting help for his mother's funeral. "I don't do charity. But my heart and limb is for only Tollygunge and its family," he says candidly.

"I want to be a people's star, for the audience I'm still the mayer chhele (mama's boy)," says Prosenjit. It's true of his real life too. His father, '60s Hindi chubby hero Biswajit, did nothing to promote him. When the family broke up, Bumba, just 14, found himself in Calcutta with his mother eking out a living by playing bit parts on stage for Rs 400. Bumba recalls with emotion, "She'd chaperone me to the sets, picking my footwear and costume and trailing me." From low days as second lead, travelling in buses to the sets to days when he churned out as many as a record-breaking 13 hits in one year, to notching 450 films in 18 years, Bumba's come up the hard way. He has never taken a break in the last two decades, except for three years in the mid-'90s. His second marriage to actress Debashree Roy had failed, the tabloids had a free run and he went into a shell. Today his new home front is merry and all he wants to do after work is "run home to my wife and baby boy".

Despite ruling the roost in Tollygunge, critical acclaim had eluded Prosenjit. Calcutta's demanding movie-going middle class disapproved of his brand of kitsch. That is changing. Rituparno has cast him repeatedly in his films, from Unishe April, Utsab to the recent Chokher Bali that have won him the Bengali intelligentsia's approval. In his new film on the floor, Ghosh has cast him as a paralytic. He has just completed a bleak film, Swapner Din with Buddhadeb Dasgupta and despite making a hasty exit from Hindi films in the mid-'80s, his role in Chokher Bali had none other than Amitabh Bachchan sending a personal note of congratulation. Bumba shrugs: "Any sensible actor knows that it's tougher to act convincing in a melodrama than in true-life roles."

Bumba has no political ambitions. However, he can't resist saying, "As a Bengali in a Left-ruled state, I can't help it if my heart and job are aimed at bettering work conditions in Tollygunge."