Moving Dots On The Map 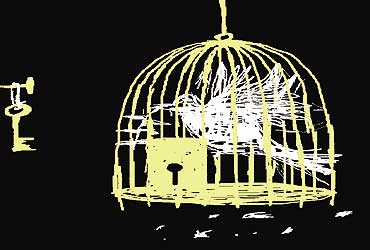 outlookindia.com
-0001-11-30T00:00:00+0553
A visit by Prime Minister Manmohan Singh to Islamabad has been talked about ever since the Indian High Commissioner there, Shiv Shankar Menon, flew back to Delhi just over two months ago. Political analysts in Delhi greeted the possibility with relief as it had become apparent that the peace process, begun three years ago by then PM A.B. Vajpayee, and given a huge push by General Pervez Musharraf during his unsolicited visit to New Delhi in April 2005, had ground to a halt. This is why a report last Tuesday in the Asian Age, that senior officials at the PMO, and more specifically Narayanan, have advised the PM not to go is extremely disturbing.

The ostensible reason for advising against the visit is that as there has been no progress in the composite dialogue even on Siachen, there would be nothing to show for the visit. Behind this may lie a similar lack of progress in the Track-II talks between S.K. Lambah and Musharraf's nominee Tariq Aziz. But no matter what the reason, we should harbour no illusions on what the outcome of another 'postponement' will be: should Dr Manmohan Singh not go, it will leave the peace process stone-cold dead.

Should this happen, the fault will entirely be New Delhi's. Let us not have any illusions whatever on this. There are plenty of sceptics and feet-draggers in Pakistan too. But since Manmohan's first meeting with Musharraf in April last year, it is he who has made all the shifts in Pakistan's policies and goals that have brought the two countries so close to peace. Musharraf virtually invited himself to Delhi. It may have been stupid and foolhardy on his part. But the fact is that it was an extraordinary gesture of trust, and more specifically of trust in Dr Manmohan Singh. But 15 months have passed since he made it. If Manmohan does not reciprocate the gesture, it will be a public slap in his face.

Manmohan, therefore, needs to go even if there are no 'breakthroughs' to be announced. But a breakthrough is there for the asking on Siachen. On this it is we, and not Pakistan, who are standing in the way. The impasse is over whether the definition of the positions the Indian army occupied before the disengagement should be part of the agreement to disengage or whether it should be in an annexure to the agreement. What New Delhi does not understand is that by insisting upon the former, it is destroying the very basis of the agreement concluded by Musharraf and Manmohan last April in New Delhi.

Neither Pakistan nor China can mount a credible military threat to India from the north over the Siachen glacier. The identification of positions held upon it, therefore, has no military significance. Thus, our insistence that the definition be part of the main agreement and not an annexure does indeed look like an attempt to define the LoC in that region by establishing a juridical claim to those positions.

But politically—and this is what is distressing beyond words—this stand is in complete opposition to, and therefore, discredits the entire vision of the common future for India and Pakistan that Manmohan Singh unveiled before Musharraf in New York in September 2004 and New Delhi in April last year. Its centrepiece was that in the age of globalisation, when national boundaries were softening all over the world and had become almost irrelevant in large parts of it, an attempt to define frontiers in terms of hard national boundaries was anachronistic. India and Pakistan had to move from a territory-centred approach to conflict resolution to a people-centred approach. Musharraf accepted this completely, and announced this to the media at a breakfast meeting with the Editors' Guild. It became the basis of the three-point framework to resolve the Kashmir dispute that the two leaders announced. The army's insistence moves in precisely the opposite direction—towards the hard boundaries that typified the 20th-century nation-state. To make matters worse, it is doing so in an area that has absolutely no strategic significance to us because neither Pakistan nor China can (or needs to) attack on us from the north.

So, by insisting upon defining 'last occupied positions' as part of the main agreement, the army has succeeded in creating the impression that the Indian establishment does not share the PM's vision. If he does not go to Islamabad now, it will imply that he does not believe in it either. It will, therefore, vindicate Musharraf's scathing criticism, voiced among others by Ayaz Amir in Dawn, that Musharraf gave away the entire shop to India and got nothing in return.

That is why the prime minister needs not only to go to Islamabad, but also accept the Pakistani draft of the agreement on Siachen. For today, it is the credibility of his vision for India and Pakistan and his implicit commitment to Musharraf that is at stake.