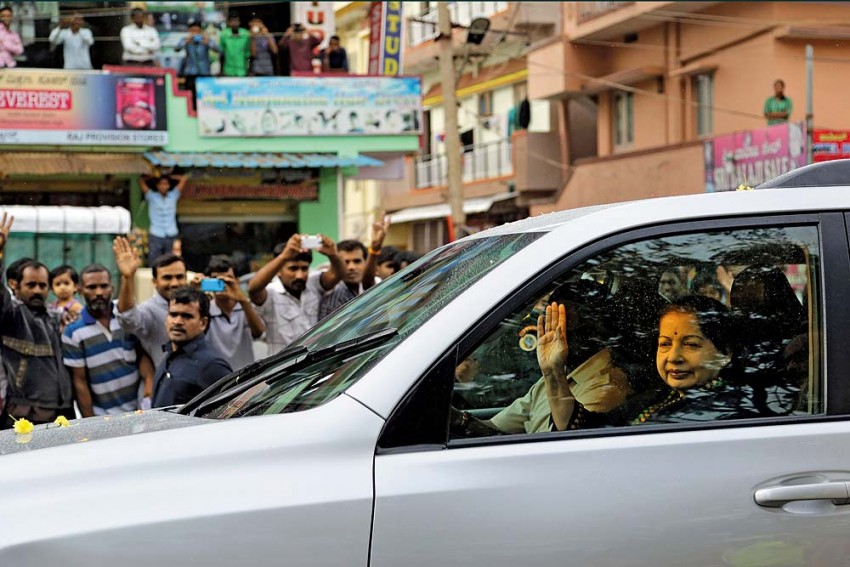 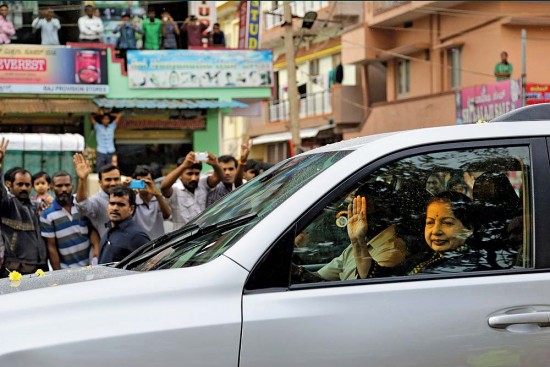 It was a Sunday in January 2015 when the BJP’s Arun Jaitley called on J. Jayalalitha at her Poes Garden place in Chennai. The “courtesy call” that lasted for 40 minutes came in for scathing criticism from political rivals. How could the Union finance minister call on a convicted ex-CM who was facing four years in prison and Rs 100 crore in fines in a disproportionate assets case? Confro­n­ted with the question, Jaitley merely said he had done so with the PM’s approval.

The conviction in September 2014 had forced her to resign and spend three weeks in jail. But less than four months after Jaitley’s visit, Karnataka HC judge C.R. Kumaraswamy overturned the fin­d­ings of the trial judge Michael Cunha, acquitting Jayalalitha and her three ass­oc­iates of all charges that they had ama­ssed wealth beyond known sou­rces of income (Rs 66.65 crore) during her first term as chief minister (1991-96).

Of course, this paves the way for her return to electoral politics, presumably as chief minister again. One of the first congratulatory calls came from PM Narendra Modi. Eyebrows were raised and the fact that the AIADMK has 37 MPs (including 11 in the Rajya Sabha) was cited as a reason why the BJP may have abandoned its aggressive plans to expand in Tamil Nadu and cosied up to Amma.

The controversial acquittal relied upon an obscure 1976 Supreme Court ruling (Kris­hnanand Agnihotri vs state of Mad­hya Pradesh) and averred that since the disproportionate income was less than 10 per cent of the total income, penal provisions in the Prevention of Corruption Act need not be applied.

The HC’s calculation that Jayalalitha’s disproportionate income amounted to “just” Rs 2.22 crore and constituted only 8.14 per cent of the total income has been immediately challenged as dodgy mathematics. As special public prosecutor (SPP) B.V. Acharya pointed out, the judge has wrongly calculated the total amount of loans taken by the four accused and their firms as Rs 24.17 crore whereas the actual sum disbursed was Rs 10.67 crore. The court had included these loans as income of the accused, boosting their income by Rs 18.17 crore (deducting Rs 5.99 crore, which the prosecution con­ceded as legitimate income, from Rs 24.17 crore). Thus, it held that assets exceeded income by 8.12 per cent, well within the 10 per cent limit fixed by the Supreme Court.

Acharya contends that if the loan amount had been calculated correctly, then the income would have risen only by Rs 4.68 crore and the DA would have been Rs 16.32 crore or 76.76 per cent. 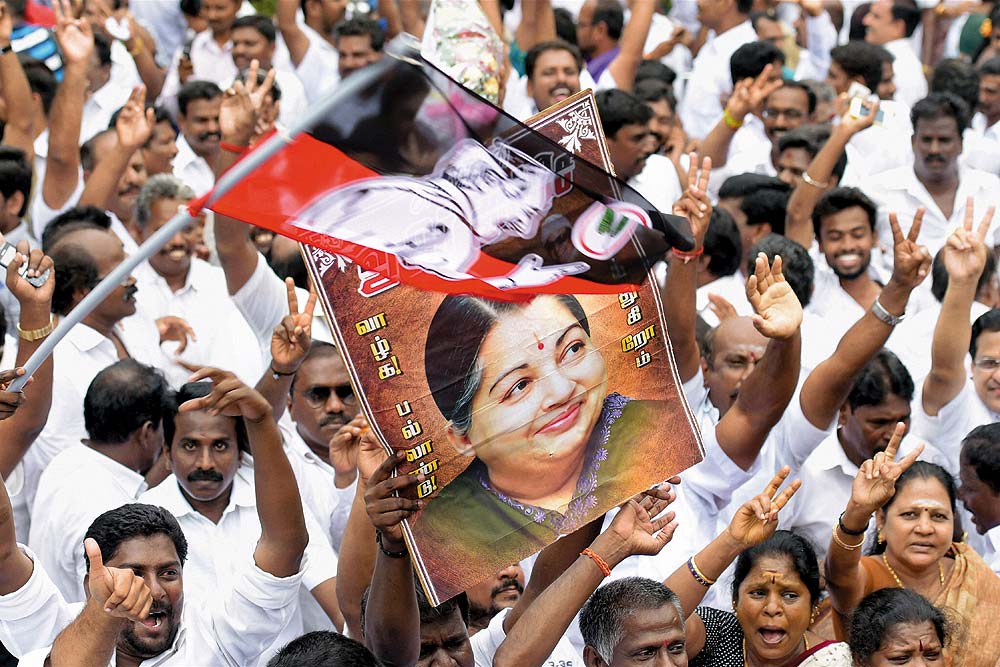 While the Congress may like to keep the case alive with fresh elections to the assembly (due by May next year), speculation is that Jayalalitha may advance it to this year-end. However, if an appeal is filed, the judiciary may feel the need to restore its credibility, which has surely taken a knock. But even if the case is kept alive, it need not dim Amma’s prospects as the opposition is in total disarray. She already enjoys two-thirds majority in the House. Now that she has “come out purer like gold after the ordeal by fire”, as she put it, she will aim for a near-total sweep.

Judge Kumaraswamy says there’s nothing illegal about Amma’s loans to buy property. But what about collateral?

Corruption cases are nothing new to Jayalalitha anyway. She was convicted in two, the TANSI and Kodaikanal Pleasant Stay cases, in 2000 and awarded over two years imprisonment. She was disqualified from contesting then too. But she led the AIADMK-led alliance to victory in the 2001 assembly elections and governor Fatima Biwi swore her in as CM. The SC then quashed her appointment and asked her to clear her name first.(Then too, loyalist O. Pannerselvam had been made proxy CM, an earlier run of the present situation.) But she was acquitted in both cases though the SC did hold that as CM it was morally wrong on her part to have bought TANSI land and she should atone by returning it.

The present DA case has few parallels in India’s judicial history. Transferred out of TN to Karnataka in 2005 on a petition filed by DMK president K. Anbazhagan, he had also challenged the appointment of R. Bhavani Singh as special public prosecutor (SPP) in place of B.V. Acharya who had quit halfway through. (It was Justice Kumaraswamy then who had dismissed the petition challenging the continuance of Bhavani Singh as SPP.) A three-judge SC bench later quashed Bhavani’s appointment, which led to  Acharya’s return.

In his opening submission, Acharya had said the appeal should be dismissed as the Karnataka government had not been impleaded as a party. Justice Kum­araswamy rejected it, saying “it is a curable irregularity”. On the matter of one prosecution witness after another turning hostile after Jayalalitha became CM in 2001 (which had led to the case eventually being transferred out of TN), Kumaraswamy said the trial judge sho­uld not have relied on the reverted ‘ori­ginal statements’ of the wit­n­esses when they were recalled in Ban­galore. Instead, it should have igno­red the evidence in its entirety as the witnesses had turned hostile. (The trial judge had referred to prosecution witnesses like Jayaraman, a Poes Garden staff who deposed that the household had 12 vehicles, six drivers, a dozen dogs for whom eight kilos of meat were bought daily and a helper whose only job was to “make Horlicks and coffee”.)

Kumaraswamy also said that merely beca­use Jayalalitha and the other accused were staying together, it could not be presu­med they had entered into a criminal conspiracy. The prosecution had said that Jayalalitha had acquired over 300 properties by availing of bank loans. The judge said there was nothing illegal about her and the others taking bank loans to buy property. That may be true but what about collateral? Why would 10 banks give a total loan of Rs 24 crore in the ’90s just for the asking?

Among the property so acquired is the 800-acre Kodanadu estate in Udhagam­andalam. Neither prosecution nor defe­nce referred to income from the tea gar­­dens (part of the estate), another point Kumaraswamy raised. Jayalalitha, the judge recalled, was an ex-filmstar and so she had known sources of income for long (never mind she was last in a film in the early 1980s). But how do Sasikala and co explain their sources of income?

When Ms Jayalalitha was returned to power in 2001, most political observers were perplexed. For in 1996 there were only unproven allegations and yet the people had thrown out her regime. Five years down the line, the same people brought her back—after her conviction in two cases. Legendary political commentator Cho Ramaswamy had an interesting take on that. He felt that “perhaps people think that keeping a politician out of power for five years is enough punishm­ent”. Unfortunately for Tamil Nadu, thi­ngs haven’t changed much in 14 years.

To Kick The Crutch