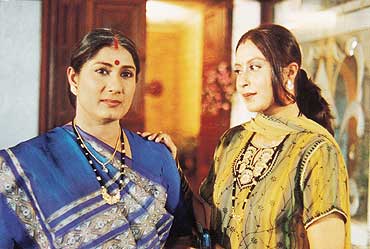 I have finally realised how difficult it is to escape from your clutches. Even though you may have fought with me and stormed back home, you continue to be a constant, irritating presence in my life. All thanks to the idiot box which conjures your replicas day after day, week after week, in all your gore and glory.

Once TV used to be the fiefdom of mythologicals and horror shows. Then came the unending tales of adultery and extra-marital affairs followed by the swanky game shows. Now, much to my dismay, you are the ubiquitous character who has managed to upstage even the unbeatable Bade Miyan. Two of your leading sagas, Kyonki Saas Bhi Kabhi Bahu Thi and Kahani Ghar Ghar Ki, rank way above Kaun Banega Crorepati in the viewership game. What's even more remarkable about the success of these saas soaps is that they are managing to keep the boob tube addicts, specially the hard-working housewives, awake late till 12 in the night and have extended prime time beyond the curfew hour of 10 pm.

While DD has never had reservations about its desi roots, it's the private upmarket channels that have turned to you, the saas-figure, in a bid to go traditional with a vengeance. Just look at Star's prime-time menu: not just Kahani... or Kyonki... but Sanskriti, Kahin Kisi Roz, Kalash, Tu Tu Main Main, Kora Kagaz, Shagun, all have the mother-in-law as the centre of action. Be it Heena or Ghar Ek Mandir on Sony or Mehndi Tere Naam Ki, Amanat, Koshish Ek Asha or Aashirwad on Zee, the top soaps are invariably driven by the machinations of the mother-in-law. The new age TV mom-in-law makes up for the age-old theme with some glitzy packaging. Or as Star executive VP, programming, Sameer Nair puts it: "TV saas is not a rigidly defined character like Lalita Pawar. She has many shades and nuances."

I'm sure it would please Sushmaji to see such glorious examples of Indian womanhood in the times of the naughty ftv. But surely there's more to it than the maan and maryada of the Indian family. For some, the success of your brigade confirms the unwritten rule—that the TV remote rests with women, so the women-oriented soaps are bound to do well. "The housewife is quite obviously the entry route," says Sanjay Chakravarty of hta. But his is not the sole, uncontested perception. Says Sony's senior VP, programming, Rekha Nigam: "It's not just women, even men are riveted."

The saas soaps are basically easy spin-offs of the Hindi family movies of the 1950s and 1960s. "It's a straight lift of a tried and tested formula," concedes TV producer Vinta Nanda. Many attribute its success to the identification factor—you strike a chord with the viewers who enjoy participating vicariously in your small screen adventures. Says Nair: "Historically, we have all lived through a joint family with the matriarch at the centre. It reflects our own life and is thus a familiar scenario."

At the heart of the saas-bahu tales is the eternal conflict. "It's as old as the institution of marriage, the fact that the mother doesn't want to give away the right on her son to a stranger," says TV soap writer Kamlesh Pandey. Ultimately, it's a political game and the complex strategies and counter-strategies are woven into the fabric of these saas soaps. "There's inherent intrigue and power-play in the saas-bahu relationship with two women fighting over the same man," says Nigam. So, the action is built around these skirmishes—a departure from the earlier TV soaps where the fights happened more in the boardrooms than the living rooms". Confrontation in relationships was more implicit than so full-blown," says media critic Shailaja Bajpai. "Even in Hum Log there were disagreements, but they weren't violently conflictual," says Akhila Sivadas of the Centre for Advocacy and Research. She finds the TV saas brigade unreal. Agrees media commentator Sudheesh Pachauri: "It's not a real urban Indian family. The TV saas belongs to some nri family inadvertently transplanted in India." After all, large, extended, multi-generational families living in sprawling mansions is not an urban Indian reality. Our reality is about how to accommodate your tribe, our real moms-in-law, in cubbyhole flats. Our fights with you are on mundane basic issues like who will cook for the family in the evening and why you're spoiling the kids by being over-indulgent. Do these ever get reflected in the saas soaps? Not quite.

So, the most obvious reason why TV is saas-struck is because your boob tube counterparts reflect an aspiration in which the consumption-oriented global market with its neon signs is married to a kind of nostalgia for the good, old but lost traditional ways of life. This sells and sells well. For, it's a time-tested albeit reinvented ace up our entertainment industry's sleeve—fantasy as an opiating escape from the pains of neurotic reality—that can't just fail. Last heard, the mother-in-law's contribution to the idiot box economy far exceeded that of kbc. The ad rates are steep, the commercial time is on the rise. The top mom-in-law shows on Star, for instance, are known to fetch more than Rs 2 lakh for a 10-second ad and the per episode earning for the channel is roughly estimated at approximately Rs 75 lakh. Measure this against the fact that these shows are much more economical to make than an expensive game show.

According to sources, the total spend for one year programming of a five-days-a-week soap would be a mere Rs 3 crore, which can be earned back in just four episodes. "It makes for a clear win-win situation for the channel," says Chakravarty. No wonder now the brands have also started riding piggyback on your success. "Saas bahu ke sang pahno sari Tarang," goes the jingle in one sari ad. Says Pachauri: "The saas trend is sponsor-financed, not reality-financed."

For the screenwriters, it's merely a case of convenience. Saas is an easy plot device, her intrigues and scheming nature inspire complicated plots and keep a show running episode after episode. Every lull is followed by a confrontation. You start off with sparks flying between two strong characters and then the story follows the trajectory dictated by the ratings. So, most soap moms-in-law are given an ambivalent character as they keep swinging from good to bad to downright ugly. In Kyonki... the saas goes to the extent of accusing her bahu of theft and even alleging that she was having an affair. Yet when the son dies she decides to have her widowed bahu marry again. However, the contradiction in this positing of women's liberation is obvious—widow remarriage is only toyed with, not executed. The first husband is shown to be alive and he would be the reason, it's believed, to stop the suggested second marriage. In Kahani... the action takes the opposite turn as the goody-goody saas turns venomous against her Ram-like eldest son and the sweet badi bahu in yet another Ramayana retold.

This shaping of the saas-bahu game in accordance with the audience's feelings and demands, however, reflects a larger cultural reality: family as the site of a contest between feudal tradition and a supposedly market-driven modernity.But the issue is much more complex, riven as it is by multiple tensions. The capricious mothers-in-law are vehicles for conveying these transitional confusions.

Now to the big question: how long will the TV reign of the saas last? "The bubble has to burst," says Bajpai. "You've to keep coming up with fresh, creative ideas, you'll have to tweak, rework and reinvent the formula," says Nigam. In fact, even as you thrive a new character has already stepped into the TV frame—the neta. So sasuma will you still be the flavour of the day? Or is it time that domestic politicking made way for big-time politicians? I'm watching.

Let Them Have Cake