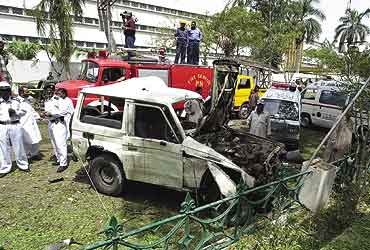 outlookindia.com
-0001-11-30T00:00:00+0553
Once Karachi bustled with night clubs and bars and a bohemian lifestyle. Secularism was its ethos, the gun only the cops' possession. Then, in 1977, Zulfiqar Ali Bhutto banned the sale of liquor to counter an alliance of religious parties. His successor Zia-ul-Haq introduced archaic Islamic laws and Karachi began to fizz out like flat champagne.

Fundamentalism became the new high, intolerance the new ethos. There were years of bloody strife between the Mohajirs and the Punjabis and Sindhis. Then Mohajirs split into factions with even bloodier consequences. On the sidelines, the Sunnis and Shias were (or are) locked in a macabre death dance. The '80s and '90s were Karachi's decades of nightmares: an estimated 7,000 people were killed.

Last week it was a suicide-bomber who came calling at the US consulate. Before him, someone had detonated a car bomb to kill 11 Frenchmen. Sure Pakistan is paying the price for joining the war against terror. But why have they chosen Karachi to wreak their vengeance on the Americans, given that most militant outfits belong to Punjab and the Frontiers?

The answer is easy: an attack on the economic hub of the country has implications other than just the death count. It saps the economy, weakens governance. In the last one month, about 14,000 foreigners have left the city, taking with them their capital and technological skills.

A senior police officer says he had recently asked during an interrogation of a Lashkar-e-Jhangvi (LeJ) activist why his group targeted Karachi. His answer was prompt: Karachi provides soft and easy targets. "Terrorist groups look for international attention. Only Islamabad and Karachi can provide this. Since the capital city is heavily guarded, they choose Karachi for their daring attacks," says he.

Under Zia, the madrassas mushroomed, becoming a training ground for those wishing to wage jehad against the Soviets. The poor of Orangi Town and Lyari slum found this irresistible: there was money to be made without guilt. Says Karachi police officer Khalil Ahmed: "The fortunes of many families changed because their sons fought the Soviets." The mercenary culture has continued. Police suspect that a poor Bengali woman was paid a huge amount for carrying out a suicide attack on the office of Urdu daily Nawa-e-Waqat. And as a thriving port, Karachi always boasted a network of criminal gangs willing to assist militants for money.

Slums are ideal hideouts for terrorists, as are madrassas on the city's outskirts. Then there are 1.5 million foreigners—Arabs, Africans, Bengalis—whom pan-Islamism mesmerises and the city can't provide an anchor to their rootless existence. They never loved Karachi to now save it from their own burning hatred.