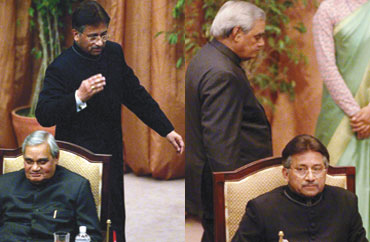 outlookindia.com
-0001-11-30T00:00:00+0553
New Delhi has fashioned an ingenious response to global pressure on it for resuming dialogue with Islamabad. It now wants Pakistan to grant India the Most Favoured Nation (MFN) status, claiming this could demonstrate Islamabad's seriousness about making progress on outstanding bilateral matters as well as prove that it is not holding the economic development of South Asia hostage to the Kashmir issue. Only such a response could persuade India to rethink its current relations with Pakistan. This is the message Richard Haas, US State Department director for policy planning, took to Islamabad last week.

On the face of it, the MFN status might seem an odd obstacle to place before Pakistan which has never concealed its opposition to such a privilege to India. But Indian officials insist that Pakistan's response on MFN will determine whether Prime Minister Vajpayee needs to go to Islamabad for the next saarc summit, scheduled for January 2003. Argues a senior official: "If the Pakistani response is positive, then there is something to build a summit on. If it's negative, why should Vajpayee waste his time?"

The demand, however, ought also to be seen in the context of Vajpayee's hardline stance on Pakistan, and the disappointment among his party cadres at the demobilisation of troops from the border. Some believe Islamabad would never accept the demand, and, consequently, provide Vajpayee a pretext to cancel his visit.

Indian officials, though, feel there's a reasonable procedural basis to the demand. For one, the Kathmandu Declaration of saarc, in January this year, stipulated that the framework for the South Asia Preferential Trade Agreement (SAPTA) should be in place by 2002-end. In New Delhi's view, the MFN grant is inherent in the concept of preferential trade agreements. India granted the MFN status to Pakistan in 1995, in keeping with its wto obligations. Pakistan, also a wto signatory, needs to comply with its conditionalities—one of which is MFN that allows free flow of goods—by January 2005. When Vajpayee went to Lahore, an MoU was signed, committing the two sides to "consultations on wto-related issues with a view to coordinating their respective positions."

New Delhi points out that non-discrimination is a fundamental principle of the wto—the signatories cannot discriminate between trading partners and therefore the MFN treatment should be accorded to all. The MFN treatment is the first Article of the General Agreement on Trade and Tariffs (GATT); it is also a priority under the General Agreement in Trade in Services (Article 2) and trade-related aspects of the Intellectual Property Rights (Article 4).

The Indian thinking is that the MFN move could undercut Pervez Musharraf's insistence on a Kashmir-first approach to dialogue with India. Even the phrase Most Favoured Nation is bound to send political shudders down the Pakistani establishment, which fears India has the potential of capturing its local markets and consequently destroying its industry. New Delhi's arguments have obviously found some international purchase. Haas told journalists last week that the US favours a "modest approach" towards Indo-Pak diplomacy, now that demobilisation has created a "breathing space".

Such a demand is also sound for another reason. After the Agra fiasco, western diplomats privately talked about the need to have well-prepared summits where the results, even if modest, are carefully choreographed and pre-ordained. In Agra, Musharraf was allowed to whizz around like an unguided missile. New Delhi believes the ploy could persuade Musharraf to declare that it isn't a matter for the military regime to decide, and allow the civilian government to take the initiative. All this, New Delhi feels, could underscore the importance of the economic content of Indo-Pak relations.It could also loosen the military regime's control over Pakistan's India policy.

In the American analysis, which Haas provided, "the extremely positive elections in Jammu and Kashmir" as well as the emergence of the "common minimum programme will make life in Jammu and Kashmir more normal—which is what everybody wants". In a politically loaded gesture, Haas took the trouble to meet Ram Jethmalani of the Kashmir Committee. Indeed, a unilateral creation of political space in the Valley could lower the existing foreign pressure on India for devolving more powers and autonomy to Kashmir.