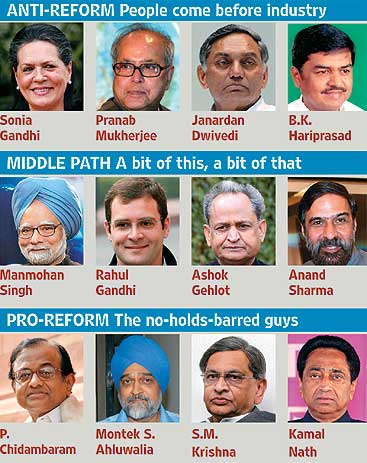 On July 8, Pranab Mukherjee rang up veteran Communist leader Jyoti Basu to wish him on his 95th birthday. The now-frail ex-West Bengal CM returned the compliment, congratulating the Union finance minister on his budget. Pranab beamed.

Congratulations have been pouring in from within the Congress too, especially from a substantial section that harks back to the Nehruvian era. Members of the party’s powerful reforms lobby—many of whom are in the Union cabinet—are putting up a brave face, explaining away the absence of big-ticket reforms to the international economic climate, saying reforms will happen, incrementally.

Party sources attribute the tone and tenor of the party’s first budget after the recent elections to the signals that have come from party president Sonia Gandhi herself. The fact that Pranab, rather than P. Chidambaram, was appointed finance minister was itself an indication, they stress, that the budget would tilt towards the social sector. "Whether it was our party’s manifesto, the government’s vision outlined...