More Chinese Than The Other

While CII and FICCI were left competing, NASSCOM stole the show 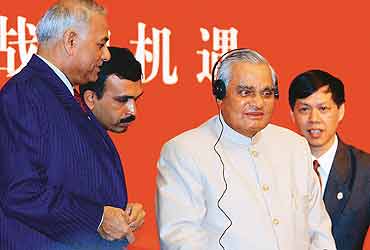 outlookindia.com
-0001-11-30T00:00:00+0553
It's an absurd question but it must be asked. Is CII more Chinese than FICCI? The big buzz about this trip was the business delegation, the largest ever to accompany Prime Minister Vajpayee. About 80 businessmen from India descended on China under the banners of CII and FICCI. But instead of presenting a joint bhartiya face, they jostled for prominence, with each side claiming a deeper Chinese connection than the other.

The head of CII's Shanghai office Piush Behl was born in Hong Kong and learnt Chinese in college in India. But FICCI representatives say his Chinese is scratchy. Their own man in China, Atul Dalakhoti, has lived in the country since he was 13 and naturally, speaks Mandarin like a native.

Still, CII managed a minor coup by getting IT minister Arun Shourie to inaugurate its office in Shanghai during the course of Vajpayee's visit. But FICCI members argue that this cannot be described as an inauguration. It was actually a "reopening" as the CII had shut down its office in China. FICCI, of course, would never have dreamt of closing shop in the world's fastest-growing economy.

While FICCI and CII competed for glory—and their representatives pleaded with journalists to attend their events—it was the relatively low profile NASSCOM, India's apex software association, that walked away with the honours. It was at an event organised by NASSCOM in Shanghai that Vajpayee, in the manner of leaders of developed countries, sought business for India's software industry. Citing the 2008 Beijing Olympic games as an opportunity for Indian and Chinese firms to work together, he said, "In mega-events like these, IT contracts are subcontracted to Indian firms by contractors from the developed world. India and China could cut out the middlemen to provide state-of-the-art solutions at cost-effective prices."

The Chinese economy may be miles ahead of ours. But there is genuine respect here for India's minor software miracle. Several Indian software companies are already players in China. Tata Consultancy Services is on the verge of signing a vital deal to computerise the trading system of the Shanghai stock exchange. Infosys plans a huge operation in China. Global Education Vision is today the only Indian company to become a partner with the Chinese ministry of information. It designs courses in software engineering for 15 Chinese universities that reach one lakh students. Says its director Rex Trivad, who moved from Chennai to China a year ago, "They are great in hardware. We are great in software. Together we can dominate the knowledge economy."