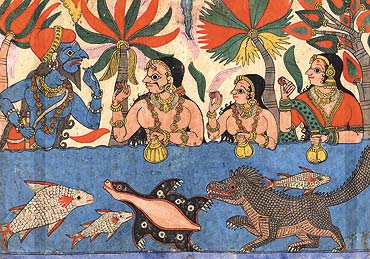 In 1805, a young scholar-official of the East India Company was invalided home to Suffolk at the age of only 35. Edward Moor had first come out to India at the age of 11, spoke several Indian languages, and was passionately interested in the cosmology and beliefs of the Hindus.

Now, with time on his hands in an unfamiliar country he hardly remembered, Moor filled his time by gathering together and organising the artistic, anthropological and textual materials he had been collecting for many years on the deities and images of Hinduism. Five years later, in 1810, he finally published his masterwork, The Hindu Pantheon. Moor's book immediately established itself as the most detailed and accurate attempt yet made by any European scholar to collate and compare the textual and artistic material on Hinduism.

Before Moor, British scholars in India had managed to write some quite amazing nonsense about the Hindus and their religious practices. Sir William Jones, the pioneering Sanskrit translator, for example, correctly believed that the ancient language of the Brahmins was "more perfect than Greek, more copious than Latin, and more exquisitely refined than either" and declared how "the warriors of the Mahabharata appear greater in my eyes than Ajax or Achilles...when I first read the Iliad". Nonetheless, he also passionately believed that the Hindus were a lost tribe of Egypt, while others in Calcutta were equally sure that the Jains were confused descendants of the followers of Pythagoras, and that the three-faced Maheshamurti image of Shiva was somehow a strange Indian representation of the Christian Trinity.

Moor's work was not flawless. Yet, by and large, The Hindu Pantheon—or as its Sanskrit subtitle had it, the Sri Sarva Deva Sabha, the Audience Hall of the Gods—remains even now a remarkably encyclopaedic and accurate guide to Indian mythology. It brought together almost everything that was then known by European intellectuals about the religion of the Hindus, and contained reliable descriptions, images and genealogies of some 2,000 of the major deities.

Moor's work on Hindu deities was not superseded for 80 years and remained in print for over a century; yet today he is remembered less for his scholarship than for the remarkable Indian paintings, miniatures and artworks he commissioned and collected as part of his research. These consisted of over 640 items of Hindu painting and sculpture, with a special emphasis on the varying iconographies of the different deities. Siva and Parvati on a Terrace: A Jaipur school gouache Moor bought in Pune

Now, for the first time, as part of the celebrations for the 60th anniversary of India's Independence, the British Museum in London is mounting a remarkable show called Faith, Narrative and Desire: Masterpieces of Indian Painting in the British Museum. This shows part of the Moor bequest, as well as many other masterworks from its own superb and rarely exhibited collection, concentrating particularly on the Hindu art commissioned from Indian painters by British patrons. The exhibition is thus a timely tribute both to the breathtaking skill of the miniature painters who created the images, and to the curiosity and passion of the early British patrons who commissioned them.

The finest of the images in the exhibition is probably a remarkable Jaipur school gouache bought by Moor in Pune, depicting Shiva and his consort Parvati. The two divine lovers sit on a tigerskin draped over a terrace just after sunset on a monsoon night, the edge of the clouds turning golden in the dying Himalayan light. The exquisite picture was a particular favourite of Moor who thought "it the most beautiful, highest finished thing I ever saw...."

Nearby is another remarkable commission of the same period, showing Shiva as the wild, fanged yogi Bhairava, riding upon a giant green parrot amid a shower of yellow amaltas. Facing it is the wonderful Month of Bhadon, part of a series of brightly coloured Barahmasa images that Moor commissioned, illustrating verses of Kaishav Das on the different seasons, and the emotions associated with them. The turbulence of the thunder of the monsoon storm mirrors the emotional upheaval of the lovers Radha and Krishna who sit enraptured at the centre of the picture. On a rooftop chhatri-pavilion above, Krishna's favourite bird, the peacock, displays his magnificent fan of tail feathers; below, three sporting elephants splash in the rain-swollen river.

Although such miniatures were not designed to be viewed in a gallery setting, the British Museum has made a remarkably good job of displaying these small but perfect pictures, with lighting carefully arranged to bring out the burnished gilt of the borders and the inlaid iridescent beetle wings and carapaces that are arranged to form the deities' necklaces and bracelets. Vishnu and Lakshmi on Garuda