Indian space scientists, driven by quest and profit, want the moon, and perhaps Mars too. Is it the aeon of the Indonaut? 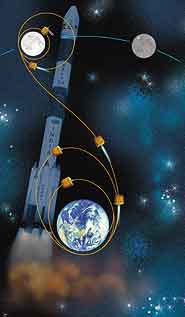 "Our final aim will be Mars because Mars has economic value and the moon has material value."
—President A.P.J. Abdul Kalam at the Aerospace Engineering Department, Indian Institute of Science, Bangalore, last week

From voyages of discovery to voyages of profit, Indian space scientists are exploring every prospect, perhaps even an Indonaut’s outing in the dark, distant heavens. This urge to hop on to the bandwagon of space-faring nations with megabuck budgets has overturned the modest intentions of a programme that originally vowed never to yearn for the moon. Ambitions are soaring beyond the moon, to grasp Mars. Such spectacular expeditions are certainly important for science and symbolism—a common perception among the scientists.

The Indian Space Research Organisation’s (ISRO’s) plans for a great leap skyward have been fired up by a number of factors. The most recent and significant one is the signal from the US on renewing relationships with ISRO and an invitation for collaboration in a Moon-Mars project during 2015-20. US President George Bush has unveiled plans for a lunar base in 2015, one that would facilitate en route stopover during trips to Mars.

The US will also collaborate in commercially exploiting the spinoffs from this space research. Says Dr K. Kasturirangan, former chairman of ISRO: "The US offer could open up joint ventures in space research as well as commercial activities. The Americans are aware of our plans for exploration of planets. So, I feel they know we can undertake them with a reasonable level of expertise." These plans would take shape during an Indo-US conference at the ISRO headquarters in Bangalore next June. "Personally, we must define our goals and objectives. Otherwise, we might spend lot more than we can achieve," says Prof Roddam Narasimha, director of the National Institute for Advanced Studies (NIAS) and member, Space Commission.

The formal dialogue would throw up a number of opportunities for joint forays in the international space market, says K.R. Sridhara Murthy, executive director, Antrix Corporation, the corporate arm of ISRO. Co-production of satellites and rockets, perhaps even a joint effort to penetrate a new marketplace—mining the moon and Mars. For once, sci-fi writers would be proved right, albeit through a joint vision, circa 2020.

The Moon-Mars project has enthused Indian space scientists no end. This spirit is best summed up by ISRO chairman G. Madhavan Nair: "Chandrayaan-I will be our first mission beyond the earth’s orbit. It reflects our desire to undertake space exploration in the future. Once the capability is established, the next logical step will be Mars." Kasturirangan feels the informal discussions within the organisation ought to make way for an evaluation of various options for interplanetary travel. "We’ve the basic building blocks, but we must be ready with a complete analysis of the project before we ask for political support," he says. Most important, their former colleague and India’s science evangelist, President A.P.J. Abdul Kalam, has egged them on to design a ‘hyperplane’, a hypersonic rocket (one that flies many times faster than the speed of sound) for interplanetary forays. "I’ve asked my friend Madhavan Nair why we don’t directly go to Mars. He said we must prove our technology before going to Mars," the President said in Bangalore last week.

Very quietly, the ISRO has been gaining confidence from an impressive run through the last decade with its home-made satellites (communications as well as remote sensing) and rockets. It has launched a couple of European satellites from the Sriharikota Range and marketed its competence in a territory that was the monopoly of a handful of countries. It has a network of stations that have guided rockets and satellites of other countries through crucial manoeuvres.

With India gunning for the moon and beyond, there will inevitably be a space race in Asia. China’s Chaang’e-I, a manned mission to the moon, has been scheduled around the same time as Chandrayaan-I with almost the same objective—a three-dimensional map of the moon’s surface. (Such a mapping would be the foundation for colonising the moon and to mine it for resources that could provide the fuel of the future.) But the moon project would involve huge costs. Estimates put it at over Rs 100 billion.

For now, ISRO has secured an approval for its Chandrayaan-I voyage with a budget of Rs 380 crore spread over a period of five years. Of this, Rs 100 crore would be earmarked for a powerful network station. The rest would be spent on the orbiter, the Polar Satellite Launch Vehicle, and a host of new technologies required for such a project. Mars, though, has till now looked an impossibility. However, ISRO has the option of participating in the US programme for forays now.

The US administration’s gradual warming up (twice in the last decade, ISRO has been subjected to sanctions—first for acquiring cryogenic engines from the erstwhile Soviet Union and later for the Pokhran-II nuclear tests) would prove beneficial not only in interplanetary trips but a number of joint researches as well. "Our ability to leap-frog into cutting-edge technologies and the fact that we have the economic strength to go with technological competence has given us a level playing field with other countries. We will pass through a phase of bashing, just like Japan and China have, but we will have opportunities to collaborate with the US," says Dr V.S. Arunachalam, professor at Carnegie Mellon University, US.

The script of its future programmes being drafted at the ISRO is more like what one would read in a sci-fi thriller. The Indian space scientist has truly become futuristic and US collaboration will only help him plan ahead.