Racism is universal, why are Asian players taking the brunt of it?

"There was sledging in my time...racial insults started with the Border era." Bishen Singh Bedi, Ex-India captain

"Are some players more equal? The referees are harsh against Asian players." Dilip Vengsarkar, Ex-India captain

"Procter is from SA, home of apartheid. The ICC should check on its referees." Inzamam Ul-Haq, Ex-Pakistan captain

"The Aussies sledge all the time, but they do not get caught. How do they do it?" M.A.K. pataudi, Ex-India captain

"Racism is something people are very sensitive to. We must be forthright...." Mike brearley, Ex-England captain

Two days before the Perth Test, smiling decorously, beaming benignly at each other, Anil Kumble and Ricky Ponting presented a dizzying, almost comical contrast to the hate and suspicion of Sydney. Nudged to the meeting table by public outcry and Ranjan Madugalle, the International Cricket Committee's chief match referee, the Indian and Australian captains decided to talk peace. The apparent cessation of hostilities came after peace parleys which didn't last even 15 minutes.

The Indians opted not to press their somewhat trivial charge that Brad Hogg had called Kumble and M.S. Dhoni "bastards". Mike Procter, the match referee, called it a "magnificent gesture", and Kumble emerged as the moral victor. You could dismiss this as mere hogwash—players who had been at each others' throats a week ago are unlikely to suddenly blunder upon the virtues of sporting spirit and love.

Indeed, the smouldering residue of the Sydney flare-up, the allegation that Harbhajan Singh had called Andrew Symonds a "monkey", and whether it constituted a racial insult, remains to be dealt with. As also the simmering rancour between cricketers across seas and peoples across continents. In this case, it was an Indian Sikh being accused of being racist against a player born in Birmingham, with roots in the Caribbean and who plays for Australia. Ironical, for the belief among cricketers past and present is that racist insults were introduced to the pitch by Australians in the last 15-odd years.

Mark Ramprakash, the former England batsman whose father was born in Guyana, says he's come across racism only in Australia: "The only time I've suffered abuse of a serious racial kind in international cricket is against the Australians." An Aussie, Darren Lehmann, was the first cricketer to be penalised for a racist insult. Former Indian captain Bishan Singh Bedi blames the Australians for starting it all. "There was some sledging in my time, but no racial insults.... It started with the last few Australian captains...Allan Border, Mark Taylor, Steve Waugh and now Ponting," he told Outlook.

Beyond the ropes, in the stands, the situation is worse, all across the cricketing world. Two years ago, on a tour of Australia, the South Africans were showered with intense racial abuse from the crowds, as were the Sri Lankans. Monty Panesar was called a "stupid Indian" by a spectator there. But all this has happened in the West Indies, in South Africa, in Sri Lanka too. And that photograph of Indian spectators in Mumbai, pumping their arms in a "monkey manner", scratching their torsos to taunt Symonds, nailed the truth about India's own racial prejudices. Clearly, bigotry is universal.

Asian players would have you believe that even referees and umpires are not immune to it. Former Indian captain Dilip Vengsarkar, presently the chairman of selectors, says there seems to be a bias against players from the subcontinent. "Right from when the match referees came in, they have been more harsh on players of Asian origin," Vengsarkar told Outlook. "Refs like John Reid, Cammie Smith, Mike Denness...it's shocking. Procter had messed up at the Oval Test (of 2006), then there's the McGrath-Sarwan spat at Antigua (in 2003), the ban on Rashid Latif. .. and now he's messed it up in Sydney also." (see box) Vengsarkar wonders why Procter remains a match referee even though he is palpably incompetent. "Are some people more equal than the others? I'm not saying that the Asian players are saints, but I think the referees are harsher against Asian players," he says.

The Oval Test (2006) Vengsarkar referred to remains a raw wound for then Pakistan captain, Inzamam ul-Haq. He even draws a parallel between the incident and the punishment meted out to Harbhajan. Inzamam told Outlook: "Procter and the ICC handled it badly... there was no evidence of ball-tampering, but Procter refused to believe us," he says. "He's from South Africa, which was the home of apartheid...the ICC should check the antecedents of the men they appoint as referees." About Bhajji, he says, "With him, it wasn't a trivial thing like slow over rate.... It was racism, and the ICC should not have hurried it...players from our region have a grouse against officials, and not without reason. Michael Atherton was caught on camera tampering with the ball, but there was no punishment."

After Sydney, an Australian newspaper dug up the ICC's roll of rogues since 1997 and found that Indians had the most infringements: 43. It failed to mention, though, that most of them were relatively minor (see infographic). Ganguly gets mention 12 times, one less than Inzamam. Muttiah Muralitharan's mates believe he was no-balled for chucking—essentially a cricketing issue —only because he was a Sri Lankan. 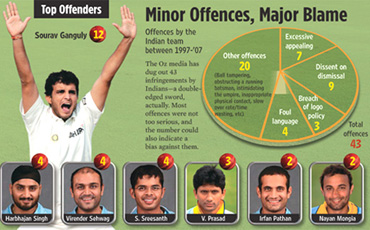 Interestingly, though Bedi says he never faced a racial insult all his life, he had his contract with Northamptonshire terminated after accusing England's John Lever of using Vaseline on the ball. His action, often called the "purest" by experts, was also questioned. As Bedi recounts it, "You can't call a white man a cheat and get away with it."

Shane Warne, that most aggressive of 'appealers', is not on the list for intimidating umpires. Michael Slater, who rained abuse on Rahul Dravid in Mumbai in 2001, was punished only for making a public comment on the incident. Glenn McGrath (and Ramnaresh Sarwan) were not even warned for that ugly incident at Antigua. Are people of colour more prone to err, or are the referees biased against them?

Former Indian captain Mansur Ali Khan Pataudi has another theory—the Aussies are clever enough not to get caught in the act. "They do it all the time but never get caught. We haven't yet understood how they do it," he says. "And why do they needle Harbhajan, and not Dravid or Tendulkar? They know who will react!" Pataudi says that while there might be an odd referee or two who's not fair, you can't make a sweeping judgement against the whole panel.

Mike Brearley, the philosopher-cricketer, doesn't rule out the possibility of people becoming too sensitive, consequently responding in "ridiculous ways" to some good-natured humour or ribbing. Take the story that Sri Lankan batsman Kumar Sangakkara narrated on a website. "We had an instance with one of our fast bowlers, Ruchira Perera, who was bowling at England's Craig White. Perera was hit for a couple of fours and said, 'Bloody White, I'm going to kill you.' He was hauled up before the match referee and his explanation was: 'I only called him by his name...Craig White!'."

Brearley, however, insists racism must be stamped out of the game. "Along with ethnic and religious discrimination, it is something to which people are very sensitive," he says. "So there are good reasons for being particularly forthright in attacks on it."

Pataudi has a radical idea, something sledgers of the world would likely unite to oppose. "The fielders should not be allowed to say anything in the hearing of the batsman," he declares. "It's a sport. Shut up and get on with it. If a team tries to gain an unfair advantage by sledging, it must not be allowed." Rather radical, and perhaps too much so. It might make the sport sterile, but there won't be any race rows at least.