If finding climbers is a chore, why not look to the machines? 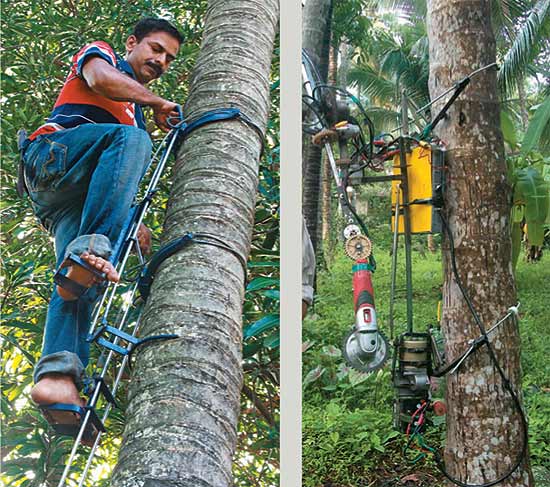 Almost 10 years ago, Joy Varghese, 48, realised that the traditional climber was not here to stay. An automobile mechanic from Kozhikode, Joy took three years to develop a prototype of a mechanised coconut climber that was simple to use. The coconut palm climber is a simple device that weighs about nine kilos. “Two steel ropes are attached to a small step-ladder. When the step is stamped on, it slides down and is locked. When the foot is taken off the step, it is released and all one needs to do is pull the ladder up as one goes up,” he says. In 2006, Joy perfected his machine and started making and selling it on a large scale. It costs Rs 2,350 apiece. Initially, he had to travel and train people but now takes orders: this year, he has received an order of 10,000 units from the Coconut Development Board.

And there are other inventors trying to crack the coconut climber conundrum. Prakasan Thattari, who also hails from Kozhikode, has invented one that is fully automatic, a sleek tree-climbing robot that can pluck coconuts and cut the fronds. “It was a labour of love: day and night, for one and a half years,” says Thattari. The robot weighs 9.5 kilos and the cutter and its movements are remote-controlled. He has also designed a manual machine that is operated by pulling ropes. But Prakasan is yet to find someone who will mass-produce them industrially.