Two blasts rip the heart of Mumbai. Mayawati's government falls. The controversial ASI report on Ayodhya is made public. Can there be any more madness on a Monday? 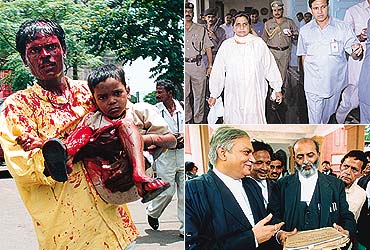 outlookindia.com
-0001-11-30T00:00:00+0553
Lightning striking thrice? It was that sort of a week. The news tickers rattled to life, went into hyperdrive, spilling out updates by the minute on events whose consequences are yet to be apprehended fully. Three seemingly unrelated occurrences, tied together by more than the date they share. First, by their scale. A shocker of a twin terror attack in Bombay. An alliance government’s fall in distant UP, a state that is still India’s largest electorally. And a 574-page document from the asi on the mandir imbroglio that might prove the least innocuous of them all. In the swirl let loose by this strange coalition of events, there also were threads—of political motives and repercussions—that looped into one another. Outlook reports.

Dark Room Tactics: Bhavdeep Kang and Sutapa Mukerjee in Lucknow on Mulayam's return to power in UP after eight years

Adventures In Wonderland: Stock-taking time for the BJP

When The Quiet One Weaves A Web: Manu Joseph on the profile of terror's new cells

The Bulls Don't Hear The Noise: Charubala Annuncio on the never-say-die spirit of Mumbai

Are 'They' Different?: Manu Joseph on the reaction of the city's Muslim community

The Genesis Of Terror: Prem Shankar Jha on the alienated post-Godhra Muslim turning into a terror machine

Phantom Of The Fossils: Poornima Joshi on the fallout of the ASI report

The End Of An Affair