An e-literacy drive in 'backward' Malappuram. As PC screens light up, so do the lives of a half million people. 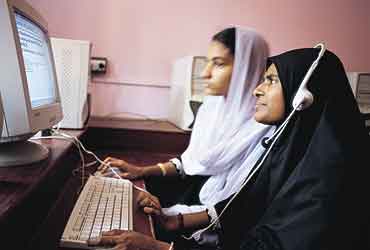 outlookindia.com
-0001-11-30T00:00:00+0553
Richard M. Stallman, guru of free software, certainly wouldn't approve. Neither do Kerala's left-wingers. They don't exactly relish the fact that the government is promoting Bill Gates' Microsoft in the state. But that aside, the fact is that five-and-a-half lakh people in the Muslim-dominated Malappuram district have climbed the first rung of the e-literacy ladder, courtesy MS. And they are a happy lot, quite unmindful of the controversy surrounding the software they are using. Now every family in Malappuram has at least one member who is computer-literate.

Ordinary folk in this most backward of districts operate PCs, send and receive mail, switch on the webcam while chatting on the net, and it's all thanks to Akshaya, the e-literacy programme. Of course, it will take them many more hours of practice with the terminals to gain ease and speed. But it has certainly opened up a new world. Says state IT secretary Aruna Sundararajan: "Yes, coverage-wise, you can call it a total e-literacy programme. But we make no such claims. Familiarising one member in a family, even with the minimal software and hardware available, will help expose the entire family to a new technology tool. But beyond that, Akshaya will serve as the hub and spokes of a modern IT-enabled services delivery system at the grassroots."

Spurred by the success of the Malappuram e-literacy experiment, the state government now plans to replicate it in the other 13 districts of Kerala. The programme will finally cover over 64 lakh families. What has enthused the government the most is the economics of the programme. The total cost of imparting the 15-hour course per student is Rs 140. Local governments chip in with Rs 120 under the Akshaya Project. And the beneficiary of the programme: he has to pay just Rs 20. The programme also generates employment. For instance, an entrepreneur setting up an e-school with an average of 500 students can earn up to Rs 70,000 a year.

Anik Haseloff, a German e-expert conducting a survey here, says what differentiates the Malappuram experiment from other e-literacy programmes (like the IT mass project in Andhra or the M.S. Swaminathan Foundation programme in Pondicherry) was the participatory model, bringing government and local entrepreneurs together in a practical embrace.

But does knowing the basics of computers alone make one e-literate? Says Malappuram collector M. Sivasankar, who conceived the project: "In a way, yes. It has been a task, trying to impress on the people, many of whom don't have even minimal education, on the benefits of the computer as a medium. But the results have been astounding. We've been able to complete the programme in little over a year."

Malappuram has surprised many with its e-literacy success. The laggard district was once derided for being slow in taking to family planning and is way behind on the quality of life index vis-a-vis the rest of the state. One explanation for the e-success is that of the 13 lakh Malayalees employed in the Gulf, two lakh are from Malappuram. So there was interest in finding an inexpensive form of communicating with relatives abroad.

In fact, many women joined the Akshaya kendras expressly for this reason—to communicate with their husbands abroad. And of the 5.5 lakh covered by the programme, more than 60 per cent are women. As Sundararajan says: "Educate the women and a whole generation benefits. The mantra holds, despite the cliche."

Remla, 25, and mother of four, is a regular at an Akshaya kendra in Kizhisseri town". My husband is in Jeddah, Saudi Arabia. My daughter, who's in fifth standard, told me I could reach a letter to my husband in a few seconds. I could even see him as I talked to him. All this became possible after I learnt how to use the mouse.And I can read Malayalam, so there is no language barrier," she says. Indeed, it's a Malayalam software, developed by the Kerala-based Centre for Development of Imaging Technology, that offered a basic enabling condition. 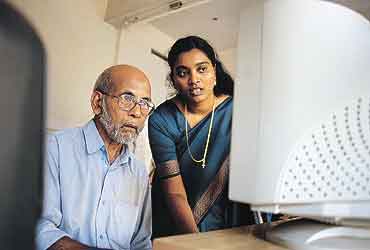 Even before the advent of Akshaya, Malappuram had 50,000 computer literates. Numerous internet cafes could be found beside the old chai-beedi shops. But with the dotcom bust, many of the cafes too shut shop. That's when local politicians approached Muslim League (IUML) leader and industry minister P.K. Kunhalikutty, who sent them to the state IT mission director. The e-literacy drive was the result of a brainstorming session, convened in response to the grassroots-level compulsion of saving 500-odd entrepreneurs and their employees.

And it's not that the Akshaya programme has only helped the young. Old-timers too have benefited. Moideen Haji, 73, is among the successful learners. "At this age too, I have uses for the computer. Three of my sons are engineers. One has a flourishing house construction business, where plans require a lot of sketching. Let me see whether I can learn to draw on the PC, maybe earn my bread," he says with a gleam in his eye.

But even with all the goodwill, sceptics wonder how the project can be sustained. What will the 500-odd young entrepreneurs, each of whom have invested Rs 2-3 lakh in setting up kendras, do when the drive concludes? Well, many of them have already branched off into selling IT-enabled services. The IT mission has also tied up with LIC, ICICI and other financial institutions to use their services.

To this end, a number of business models have evolved in Malappuram. The setting up of an Akshaya hardware park with 105 entrepreneurs selling branded hardware is one plan. There is also an understanding for an Akshaya-Intel co-branding of products. Says district coordinator, IT mission, M.S. Vinod: "The arrangement with LIC is in place. Akshaya staff members are already working as insurance agents. Soon they will take over as franchisees of loan and money transaction firms. We are talking to Western Union Money Transfer too. Akshaya will tap every available opportunity in the service sector, even travel and tourism."

Whatever the critics say, for the people here the benefits of being PC-savvy have been too many to count. Business, many believe, is just a click away. And it didn't cost anything. Just Rs 20 to get hooked on to those fabled infobahns.