A striking, courageous woman, she lent herself to being a symbol. In reality, she belied the promise. 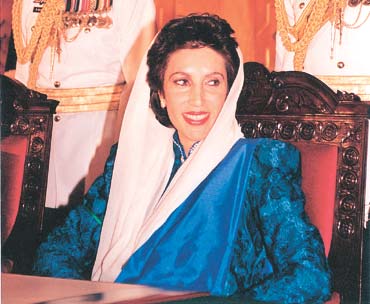 The fatal assassin's bullet in Benazir's neck removes from the scene a courageous, secular and liberal woman who continued to fight on despite a suicide bomb attack aimed at eliminating her the day of her return from exile, and who shrugged off the clear danger to her life that further campaigning entailed. It gives further momentum to Pakistan's jehadis in their campaign to turn Pakistan into a Taliban-like Islamist state, and may well lead to the postponement of the January 8 election though the caretaker PM for the moment has said they will be held on schedule. Nawaz Sharif, leader of the rival Muslim League (N), has said his party will now boycott the poll, which already makes its results meaningless.

Benazir's death is also, of course, a personal tragedy, both for the striking woman who embodied the hopes of so many liberal Pakistanis, and for her family. Benazir Bhutto has three children who will now be left motherless, and a party—the most popular in the country—which will be left leaderless. She has no clear successor, and trained up no one as a deputy who can easily fill her shoes. As she said herself in her last speech, shortly before being killed, "Bomb blasts are taking place everywhere", "The country is in great danger."